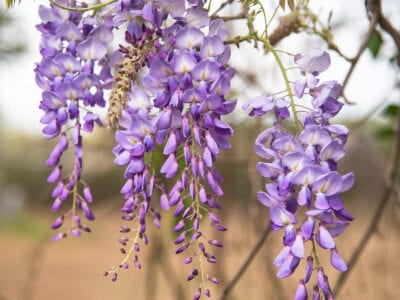 Wisterias are magnificent winding vines that perfume the air lightly when flowers are present. The ornamental plants are hardy, fast growing, and prey to few pests or disease problems—most of the time. However, an important pest of the plant, the wisteria borer, is a beetle that tunnels into the woody stems of wisteria, causing interruption of the flow of water and nutrients. Knowing how to control borers on wisteria at an early stage will help protect the plant’s health and appearance.

Damage to the appearance of a wisteria is one of the obvious problems, but the issue goes deeper. The holes open up the plant to introduction of rot and disease, as well as other insect invaders.

The most important issue is the girdling of crucial meristem tissue on the interior of the stems. This tissue is responsible for ferrying nutrients and moisture to all parts of the plant. When the tunnel cuts through this tissue, the food and water are stopped from traveling to the rest of the stem.

Wisteria borer damage is the most problematic in young trees which have few reserves to help them battle back from infestations.

Boring beetles attack many varieties of plants and trees. The main types of wisteria borers are the long-headed borer or round-headed borer. These are actually beautiful beetles with vibrant coloring.

The long-headed borer has lengthy antennae and their larvae are called round-headed borers. These appear as chubby yellowish-white grubs with brown heads and evident mouth parts. Round-headed borers on wisteria cause the majority of the damage as they feed and tunnel into wood.

One of the most common varieties that may become pests on wisteria is the spotted tree borer. Wisteria borer control begins before the adults lay eggs and prior to tunneling activity.

How to Control Borers on Wisteria

The first step to helping your wisteria is to keep it healthy. Healthy vines grown in good soil, with adequate nutrient and moisture supplies are able to withstand some of the boring activity.

Vines that are infested need to be removed so the borers can’t move into unbothered real estate.

Chemical wisteria borer control with residual sprays must be applied prior to adults laying eggs. The larvae will hatch and eat the poison as they feed, effectively killing them before they can reach the sensitive interior of the stems.

If larvae are visible, spray spinosad or Bacillus thuringiensis for non-toxic control. This must be done when the round-headed borers on wisteria are young to be effective.

When all else fails, try the “pick and crush” method in early spring as larvae emerge to feed. Not only is this satisfying but it is non-toxic and requires no special equipment.

Another way to combat the pests is by fishing them out. Use a length of thin wire and twirl it around in the borer hole. You can skewer the larvae and then slowly, gently pull it out of the tree.

Some gardeners swear by putting a drop of a petroleum based product in the hole to coat the larvae and suffocate it.

Try any of these quick easy controls before you spend a lot of money on chemical solutions. They just might work!