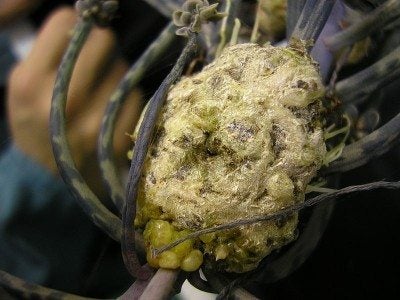 The fragrance and beauty of a mature wisteria vine is enough to stop anyone dead in their tracks — those graceful, bunching flowers swinging in the spring breeze might even turn anyone into a plant lover. And there’s a lot to love about wisteria, including its extreme hardiness in a world full of plant pests and diseases. The most common wisteria diseases are rarely serious, although a few rare wisteria problems may be deadly for the plant. Read ahead for a breakdown of the common causes of wisteria sickness.

The fungal leaf diseases commonly known as powdery mildew and leaf spot are frequently observed in wisteria, but they’re not a major concern. Both may start as small yellow spots on leaves, but powdery mildew eventually develops a white, fuzzy coating that may engulf the whole leaf. Leaf spots don’t generally spread, but they may dry out, turn brown or give affected leaves a shot hole appearance.

Controlling wisteria vine diseases caused by leaf-invading fungus requires little more than plucking out the troubled leaves and pruning your wisteria more aggressively to allow better air flow. If the fungus is widespread, you may want to spray your plant with neem oil after thinning the canopy.

Unlike fungal leaf diseases, crown and root problems in wisteria are rarely minor. Crown galls, cankers, root rots and graft failures may result in the total collapse of your plant. These conditions usually cause plants to slowly fail, wilting all or part of the canopy, as the sick plant parts have increasingly less access to nutrients from the root system.

Galls and cankers are unusual formations, either swollen knots or sunken areas that may weep sap. They can be cut out of branches, but if the crown of the plant is affected, there’s no treatment.

Graft failures may occur in plants as old as 20 years, due to a graft that was only ever partially compatible. Older plants may not be saved, but younger plants can sometimes be regrafted onto vigorous root stock if they’re pruned back aggressively.

Root rots, on the other hand, are preventable and may be treated in very young plants. Root rot occurs when plants are kept in constantly water-logged conditions. Early in this disease, decreasing watering may be enough to save your plant. As the disease progresses, you may have to dig the plant, trim the roots back to healthy tissues and replant it in a very dry location, watering only when the top two inches of soil feel dry to the touch. If a significant portion of the root is affected, your plant may not survive regardless of your efforts.

A variety of pests nibble at wisteria leaves, but only the wisteria borer has been observed giving established plants any real problems. These tiny beetles cut perfectly round holes into the woody parts of the vine, where they may spend a significant portion of their lives. Once inside, they hollow out tunnels and galleries where females will lay their eggs. Borers can kill wisteria if they manage to tunnel across the transport tissues, effectively severing the roots from the plant.

Control is difficult, so your best bet is to properly water and feed your wisteria if the infestation is small. Borers seek out plants that are stressed or weak, and usually avoid the healthy ones. If you only have a few borer galleries, probe them deeply with a long piece of stiff wire, killing eggs, larvae and adults within.

Once borers are inside your tree, they are difficult to control with chemicals, although frequent applications of a broad-spectrum pesticide around borer holes will eventually kill them when the next generation emerges to find mates. Understand that this method will likely kill many beneficial insects and bees; it’s far more environmentally responsible to remove the diseased wisteria and start again.