June Bug Facts And How To Kill June Bugs 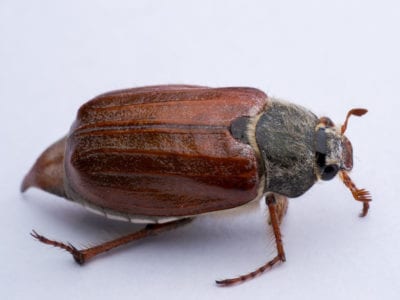 June bugs, also known as the June beetle or May beetle, can cause damage to many landscape plants and be a pest to the home gardener. June bug insects can be controlled though with a few steps. Let’s look at what are June bugs and how to get rid of June bugs.

What are June Bugs?

June bugs are scarab beetles. There are several different species that are commonly called June bugs and these include:

All of these pests appear roughly around late May through June, have roughly the same body shape with the oval back and pincers at the front, and feed on the leaves of landscape plants.

The grubs of these insects can also cause damage to lawn and turf grass. The damage is normally large brown areas in the grass than can be easily lifted from the ground.

How to Get Rid of June Bugs

All of the beetles that can be called June bugs are treated in the same way.

Sevin or similar insecticides can be applied to affected plants if the adult June bug is eating your plants as well.

If you are looking for an organic method of how to kill June bugs, you can build a June bug trap. Use a jar or a bucket and place a white light at the top of the container with an inch (2.5 cm.) or two of vegetable oil at the bottom of the jar or bucket. The container should be open so that the June bugs can fly in towards the light. They will fall into the oil below and be unable to fly away again.

Attracting small snakes, frogs, and toads to your yard can also help get rid of June bugs, as these are predators of this pest.

Knowing how to get rid of June bugs can make the lawn and flowers in your garden a little safer.