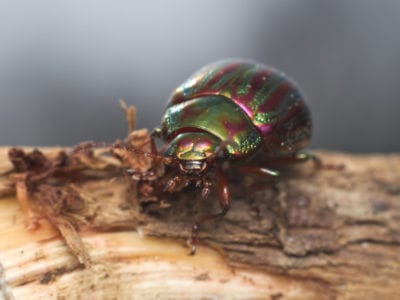 Depending upon where you are reading this, you may already be familiar with rosemary beetle pests. Sure, they are beautiful, but they are deadly to aromatic herbs like:

If you live for fresh herbs in your cooking, you’ll want to know about managing rosemary beetles or if you are in a particularly homicidal mood, how to kill rosemary beetles.

What are Rosemary Beetles?

It’s always helpful when dealing with an adversary to read up on your foe. Gather as much knowledge as possible before deciding on your battle strategy. First, you need to know what rosemary beetles are.

Rosemary beetles (Chrysolina americana) are beetle pests that are actually brilliantly colored in metallic hues of green and purple. Although they are fairly small, they are easy to spot with their colorful advertising. They first appeared in the United Kingdom in 1994 brought over no doubt on imported plants from southern Europe… a rather unwelcome import. They have rapidly made themselves at home throughout England and Wales into Scotland and Northern Ireland.

The damage is easy to spot as well, brown, dying plant tips. They and their slug-like young dine on the tender new shoots of the herbs. They also like to eat dinner as a family, so where there is one, there are often several.

In the late spring, the first of these unwelcome visitors can be spotted. Adults do little or no feeding until midsummer but by late summer, they are thinking about expanding the family and begin to eat, mate and lay eggs. The eggs are laid on the underside of the leaves and will hatch in 10 days. The larvae feed for a few weeks and then drop down to the ground to pupate.

A long-living insect, rosemary beetle pests can have some overlap between the new and old generations, which means that adult beetles can be found almost any time of the year. Oh joy.

They can decimate a plant quickly, so managing rosemary beetles, at the very least, is of primary importance. To control rosemary beetles, you can handpick them; they shouldn’t be hard to spot. If your plant is large enough, you can shake it and then pluck them up from the ground and drop them in a bucket of soapy water.

This may be a bit too tedious for some of you, in which case you want to know how to kill rosemary beetles using chemical warfare. Look for products that contain pyrethrum, natural fatty acids, or surfactant-based products. A general insecticide containing bifenthrin or imidacloprid should do the trick. Do not spray when the plant is in flower or you will kill off all your bee friends too. Also, I would be super leery about utilizing the herbs once you have sprayed them.

Unfortunately, there are no known natural enemies commercially available to control rosemary leaf beetles. Netting and fleeces will stop adults from moving between plants, so at least containment might be possible. Check plants weekly for the beetles and remove them before their numbers get out of hand.

Lastly, encourage insectivorous birds by providing nesting boxes in the spring as well as hanging feeders in the winter. Our insect loving avian friends can do all the dirty work for you.