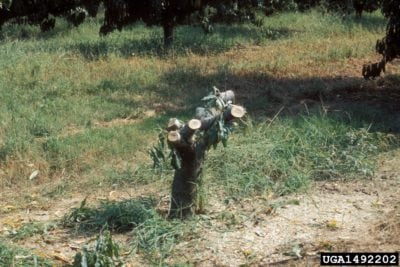 What is Phony Peach Disease?

As its name indicates, Xylella fastidiosa on peach trees is a fastidious bacterium. It lives in the plant’s xylem tissue and is spread by sharpshooter leafhoppers.

X. fastidiosa, also referred to as bacterial leaf scorch, is widespread in the southeastern United States but can also be found in California, southern Ontario, and into the southern Midwestern states. Strains of the bacterium also cause various diseases in grapes, citrus, almond, coffee, elm, oak, oleander, pear, and sycamore trees.

Phony peach disease in plants was first observed in the South around 1890 on infected trees that bloomed several days earlier than their healthy counterparts. These infected trees also held onto their leaves later into the fall. By early June, infected trees appear more compact, leafier, and a darker green than uninfected trees. This is because the twigs have shortened internodes and increased lateral branching.

Overall, PPD results in lower quality and yields with fruit drastically smaller than average. If a tree is infected prior to bearing age, it will never produce. Over the course of several years, infected tree wood becomes brittle.

Prune out or remove any diseased trees and destroy any wild plums that are growing nearby; June and July are the best times to observe symptoms of PPD. Control weeds near and around the trees to limit habitat for the leafhoppers and the bacterium.

Also, avoid pruning during the summer months, as this will encourage new growth that leafhoppers like to feed on.