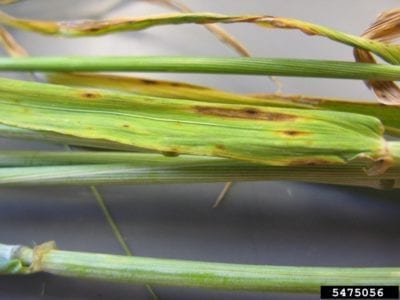 Barley speckled leaf blotch is a fungal disease wherein leaf lesions interfere with photosynthesis, resulting in lower yields. Leaf blotch in barley is part of a group of diseases known as Septoria complex and is in reference to multiple fungal infections that are commonly found in the same field. While barley with leaf blotch is not a fatal condition, it opens the crop up to further infections that can decimate the field.

Symptoms of Barley with Leaf Blotch

All types of barley plant are susceptible to barley septoria leaf blotch, which is caused by the fungus Septoria passerinii. Symptoms of leaf blotch in barley appear as elongated lesions with blurred margins that are yellowish brown in color.

As the disease progresses, these lesions merge and may cover large areas of the leaf tissue. Also, a plethora of dark brown fruiting bodies develop between the veins in the straw-colored dying areas of the spots. Leaf margins appear pinched and dry.

The fungus S. passerinii overwinters on crop residue. Spores infect the next year’s crop during wet, windy weather that splashes or blows the spores to uninfected plants. During wet conditions, plants must remain wet for six hours or longer for successful spore infection.

A higher incidence of this disease is reported amongst crops that are densely planted, conditions that allow the crop to stay moist longer.It is also more common with crops of higher nitrogen inputs.

Since there are no resistant barley cultivars, be sure that seed is certified disease free and treated with a fungicide. Rotate the barley crop to aid in barley leaf blotch control and, most importantly, dispose of crop residue.