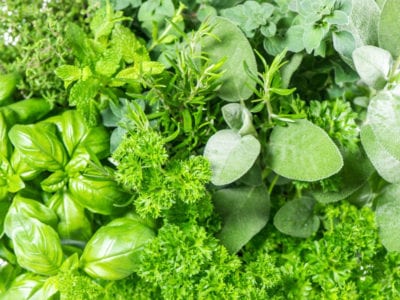 Theophrastus was an ancient Greek known as the father of botany. In fact, the ancient Greeks were quite adept and knowledgeable regarding plants and their uses, specifically herbs. Mediterranean herb plants were commonly cultivated for daily use during the tenure of this ancient civilization.

Growing Greek herbs were used fresh or dried in powders, poultices, ointments and tinctures to treat a variety of physical ailments. Medical issues such as colds, swelling, burns and headaches were all treated using Mediterranean herb plants. Herbs were often incorporated in incense and were the main component of aromatherapy oils. Many culinary recipes included the use of herbs and gave rise to the common practice of ancient Greek herb gardening.

When Greek herb gardening, a number of herbs may be included in the herb plot such as any of the following:

Many herbs imparted specific qualities. For instance, dill was thought to be a harbinger of wealth, while rosemary increased memory and marjoram was the source of dreams. Today, one might definitely include basil in the Greek herb garden, but the ancient Greeks omitted it due to a superstitious belief about the plant.

The traditional Greek herb garden itself consisted of wide pathways bisecting various plots of herbs. Each herb had its own section of the garden and was often grown on raised beds.

Plants common to the Mediterranean herb garden thrive in that region’s warm temperatures and dry soil. The home gardener will have the most success with a good quality well-draining potting soil. Place the herbs in full sun and fertilize, especially if the herbs are contained in pots, with some all purpose fertilizer once a year or so.

Potted herbs will require more consistent watering than those in the garden. A good dousing once a week is probably sufficient; however, keep an eye on the pot and use your finger to check for dryness. Mediterranean herbs can handle a lot of water, but don’t like to get their feet wet, so well draining soil is crucial.

In the garden plot, once established, most herbs can be left without much irrigation; however, they are not desert plants and do need some during extended dry periods. That said, most Mediterranean herbs are drought tolerant. I said “tolerant” as they will still need some water.

Mediterranean herbs primarily need full sun — as much as they can get, and warm temperatures to stimulate the essential oils that impart their wonderful flavors and fragrances.