Unusual Culinary Herbs – Spice Up Your Garden With These Different Herbs 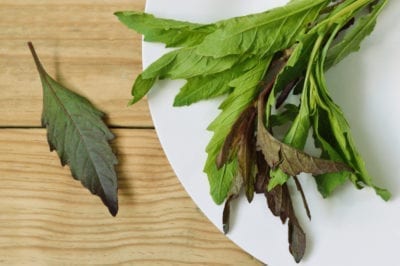 If you love to cook and fancy yourself as somewhat of a foodie, then it’s likely you grow your own herbs. While most people grow the usual suspects: parsley, sage, rosemary, thyme, mint, etc., the true connoisseur should spread his or her gardening wings and try growing some unusual, exotic culinary herb plants.

If you’re interested in different cuisines, you may already have encountered the need for different herbs, so now it’s time to grow your own.

About Unusual Herbs to Grow at Home

Different herbs to try might simply be variations of a standard herb. Take mint, for instance. There are so many varieties of mint, from chocolate to pineapple to grapefruit and ginger, each with that intrinsic mint flavor, but with a twist. Or, instead of growing sweet basil, try growing beautiful purple Thai basil. Many common herbs have a relative with a little different spin that can liven up a recipe.

You can also decide to go more exotic and grow rare herbs for cooking that are not commonly found in the pantry. There are so many cultures on our planet, each with a unique cuisine that often features herbs that are indigenous to that region. Growing rare herbs for use in cooking is the perfect opportunity to try something new.

Perilla, or shiso, is a member of the herb family that is commonly used in Japanese cuisine. The beautiful serrated leaves are available in either green or red and are used in sushi, soups, and tempura and added to rice. Red perilla has a licorice-like flavor while green has more cinnamon notes. Seeds should be sown in the spring for a harvest in about 70 days.

Epazote is a common herb used in Mexican cuisine. The uniquely flavored leaves, both minty and peppery with essence of citrus, can be used in a myriad of ways. The leaves are steeped for a spicy tea, cooked as a leafy green, or added to soups, tamales, egg dishes, chilis, etc.

Persicaria odorata, or Vietnamese coriander, is a tropical perennial with a spicy flavor perfect for stir fries and curries. Grow this frost tender herb in full sun in well-drained containers that can be brought indoors to overwinter.

Lovage (Levisticum officinale) is a perennial herb that is hardy in USDA zones 3 to 8. The plant looks similar to flat leaf parsley, but the flavor is anything like parsley; it actually tastes just like celery and can be used in place of celery in soup recipes that call for it. Lovage is tolerant of sun to partial shade with moist, well-draining soil.

French sorrel didn’t used to be considered an exotic herb plant. At one time it was very popular, but its popularity never really made it over the pond. It is less acidic than common sorrel, with a hint of apple and lemon essence. It can be eaten raw like spinach in salad or on sandwiches, or pureed into soup.

Mexican tarragon has the sweet, anise-like tarragon flavor that accents fish, meat, or egg dishes. It is used in Día de Los Muertos festivities as an offering to the deceased, and it is also made into a popular beverage consumed throughout Latin America.

Lemongrass is another unusual herb to grow at home that is commonly used in Asia and Latin American cuisine. Lemongrass has a bright, citrusy flavor without any bitterness or acidity that pairs well with fish and other dishes.

Lastly, if you live in USDA zones 8 to 11, you can try your hand at growing your own stevia (Stevia rebaudiana). Stevia’s leaves are several times sweeter than sugarcane and are crushed into a powder that can be used as a sugar replacement. Stevia should be planted in full sun in moist, well-draining soil.