Bean Plant Companions: What Grows Well With Beans In The Garden 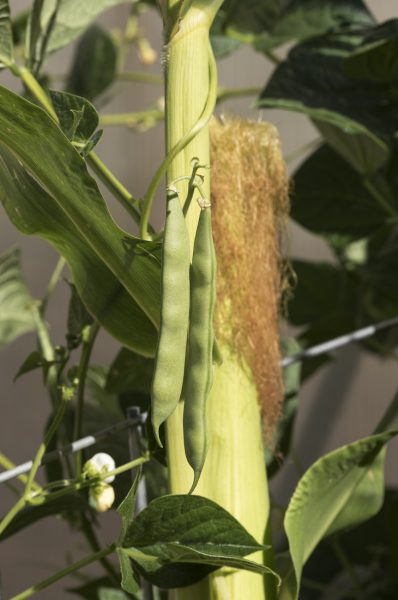 Many different plants not only coexist together, but actually derive mutual gratification from being grown near each other. Beans are a prime example of a food crop that benefits greatly when planted with other crops. Companion planting with beans is an age old Native American practice called “the three sisters,” but what else grows well with beans? Keep reading to learn about companion plants for beans.

Beans fix nitrogen in the soil, a necessary nutrient for healthy growth of other crops, which is truly a boon to the gardener. The Iroquois people were aware of this reward, although they chalked it up to a gift from the Great Spirit. Their god also bequeathed to the people corn and squash, which then became logical companion plants for bean.

Corn was planted first and when the stalks were tall enough, the beans were sowed. As the beans grew, squash was planted. The corn became a natural support for the beans to clamber up, while the beans made the soil rich in nitrogen, and the large squash leaves shaded the soil to cool roots and retain moisture. Don’t stop with just corn and squash though. There are many other beneficial plants that can be combined when growing beans.

Companion plants for beans or other crops should be plants that have a natural symbiotic relationship. They may protect other crops from wind or sun, they may deter or confuse pests, or they may attract beneficial insects.

What Grows Well with Beans?

For bush beans, the following work well grown together:

Pole beans do quite well when planted near:

Also, don’t forget to interplant with the corn and squash! Just as there are beneficial crops to plant with beans, there are other plants to avoid.

The Allium family does neither pole nor bush beans any favors. Members such as chives, leeks, garlic, and onions exude an antibacterial that kills the bacteria on the roots of the beans and halts their nitrogen fixing.

In the case of pole beans, avoid planting near beets or any of the Brassica family: kale, broccoli, cabbage, and cauliflower. Don’t plant pole beans with sunflowers either, for obvious reasons.