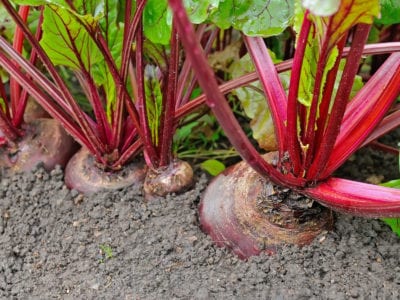 The earthy, sweet flavor of beets has captured the taste buds of many and growing these tasty root vegetables can be so rewarding. One roadblock you may come up against in your garden is beets with powdery mildew. To enjoy your beet harvest, know how to recognize this disease and how to combat it.

Symptoms of Powdery Mildew on Beets

The sooner you detect signs of powdery mildew on beets, the easier it will be to control and treat it. An early sign of the disease, which is caused by a fungus that only grows on beet and chard plants, is the formation of small white spots on the undersides of older leaves.

Eventually the white, powdery substance will spread to all areas of the leaf and to all leaves on the plant. You may also start to see dark spots on the leaves. It can take just a week for powdery mildew in beet plants to spread to all the leaves.

How to Treat Powdery Mildew

Powdery mildew is a bigger issue for farmers raising sugar beets than for the average backyard gardener. The disease will not necessarily limit your beet root harvest, but it can limit sugar content, which is problematic for the yields on farms. Still, it’s best to get the disease under control in your garden if you spot it.

Beets with powdery mildew can be treated with a fungicide. The most important consideration in treating the infection is timing. It is much easier to control it in the early stages than when the disease has become widespread among your beet plants. You can also take steps to prevent powdery mildew on beets in your garden. Surface irrigation keeps the lower leaves of beet plants moist, which encourages fungus growth. Water your beets with a sprinkler from above instead, preferably early morning, giving the plant leaves plenty of time to dry.

Powdery mildew in beet plants can become an insidious infection. Keep conditions right to prevent the growth of fungus and, if necessary, visit your nursery to get a recommendation for a fungicide and take care of the infection as soon as you see it taking root.