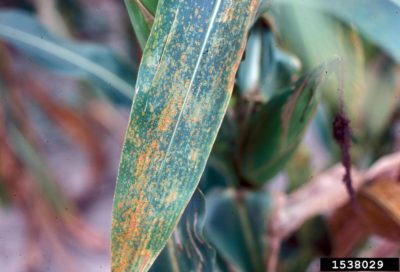 Common rust of sweet corn is caused by the fungus Puccinia sorghi and can result in serious losses in yield or quality of sweet corn. Sweet corn rust occurs in temperate to sub-tropical regions and overwinters in the southern Unites States and Mexico. Summer storms and winds blow the spores of corn rust fungus into the Corn Belt.

Symptoms of Rust on Sweet Corn

At first, symptoms of corn rust fungus show as tiny, yellow, pin prick spots on leaves. Seven days after these symptoms appear, they develop into reddish brown pustules that are formed on the upper and lower surface of the leaf. The pustules then rupture, and the small, cinnamon-colored spores are revealed. The pustules may be circular or elongated and can be found in bands or patches. Young leaves are more susceptible than mature leaves to common rust on sweet corn.

Common rust of sweet corn is more commonly spread when conditions are moist with a high relative humidity of 95% or higher and mild temperatures of between 60 and 77 degrees F. (16-25 C.). Spores land on foliage and within three to six hours of optimal conditions, germinate and infect the plant. Even light dew will allow the spores to germinate.

Commercially grown dent corn is rarely afflicted with the disease; rust on sweet corn is much more common. This is due to the fact that many popular sweet corn hybrids lack resistance and also has to do with when the corn is planted.

To reduce the incidence of corn rust, plant only corn that has resistance to the fungus. Resistance is either in the form of race-specific resistance or partial rust resistance. In either case, no sweet corn is completely resistant.

If the corn begins to show symptoms of infection, immediately spray with a fungicide. The fungicide is most effective when started at the first sign of infection. Two applications may be necessary. Contact your local extension office for advice regarding specific fungicides and their uses.