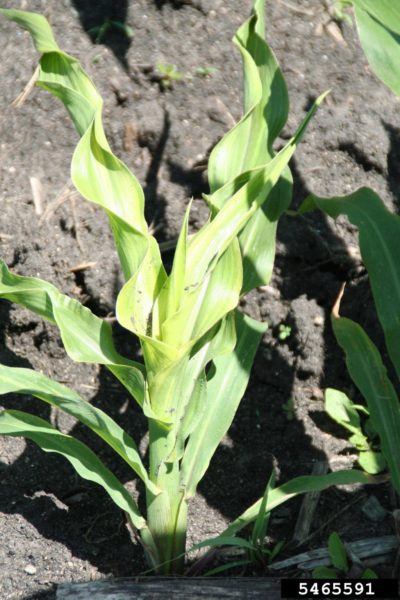 Downy mildew is an infection caused by a fungus. There are a few varieties of downy mildew that affect corn and other grasses like wheat and oats. Some of the varieties include Crazy Top and Sorghum downy mildew. Regardless of which type may be affecting your sweet corn, the signs are similar, as are the methods for prevention and control.

Sweet corn with downy mildew may exhibit several symptoms, including any of the following:

A common cause of the infection of downy mildew in sweet corn, or at least that triggers a proliferation of the infection, is excessive moisture. Saturated or flooded soil can cause an infection, and humid conditions contribute to it. To prevent downy mildew, it is important that sweet corn is grown in soil that drains well and in an area that is not prone to flooding.

Other ways of managing or preventing sweet corn downy mildew infections is practicing crop rotation and using varieties that are resistant to the fungus. The spores of the fungi that cause these infections are viable for a long time in the soil, so rotating with crops that are not susceptible to infection can help. Also helpful is clearing out plant debris and destroying it to prevent the spread of the spores.

If you do see downy mildew in your corn crop, and you catch it early, you can remove affected plants and leaves to prevent spread. You can also try fungicides recommended by your local extension service or nursery. If the infection persists, stop growing corn in that area and put in a non-susceptible plant for a season or two.