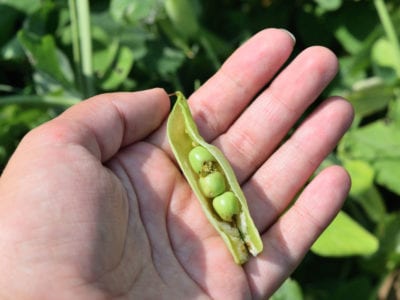 Whether snap, garden variety or oriental pod peas, there are several common pea problems that may plague the home gardener. Let’s take a look at some of the issues affecting pea plants.

Asocochyta blight, bacterial blight, root rot, damping off, downy and powdery mildew, fusarium wilt, and various viruses are some of the pea plant diseases that may afflict pea plants.

Asocochyta blight is composed of a trio of fungi, Ascochyta pisi, Phoma medicaginis var. pinodella (A. pinodella), and Mycosphaerella pinodes (A. pinodes), which survive through the winter months in plant debris or are introduced during planting season on infected pea seeds. Wind and rain transmit spores onto healthy plants.

Although symptoms may vary depending upon the fungus causing the infection, generally Asocochyta blight appears as a blackened stem, yellow foliage with brown blotches and bud drop. Both pods and seeds may be afflicted, and severe infections kill off seedlings.

To control Asocochyta blight remove and destroy diseased plants as soon as symptoms appear. There are no resistant fungicides available, so preventative measures such as crop rotation with non-susceptible crops on a yearly basis, and planting of disease free seed are recommended.

Similar to the Asocochyta blight, bacterial blight is another disease in pea plants that survives winter in infected surface plant refuse and in infected seed. Most commonly caused by the bacteria Pseudomonas syringae, bacterial blight may also be caused by other bacterium. Again, water, either rain splash, overhead watering or pet or human activity in a wet garden, spread the bacteria afflicting pea plants, often those that are already damaged by such things as frost.

At first bacterial blight looks like shiny, dark green water spots on the leaf surfaces and then these irregularly shaped spots become papery, brown to translucent with the center lighter in hue. If allowed to continue, the disease will spot all of the plant, including its pods and cause bud and young pod drop.

To fight bacterial blight, plant commercially grown, disease free seeds and do not use those from other plants, even if they appear to be healthy. Remove all debris in the fall and rotate crops yearly. Also, water plants at the base of the plants, and do not work around them when leaves are wet to prevent the spread of this disease in pea plants.

Root rot and Damping off

Caused by a number of fungi, root rot and damping off are other common pea problems exacerbated by cool, wet soil. Seeds become soft and rotted while seedlings fail due to sunken stem lesions. Older seedlings develop root rot when peas are planted in overly wet soil.

Root rot fungi makes foliage yellowed, stunted, wilted or just plain dead looking. Should you be so inclined to look, roots will be brown, black or red with the outer layer of root peeling off. On occasion, lesions may appear.

To prevent these fungal conditions, purchase commercially grown, disease free seeds and/or those pre-treated with fungicide. Again, rotate crops and be sure to plant in well draining soil with proper spacing. Do not over water.

Downy mildew and powdery mildew are also fungi that are spread via spores, although cool, moist conditions foster spore dispersal in downy mildew, while absence of rain does so in powdery mildew.

Fungicide application may be helpful as well as crop rotation. Remove debris at the end of the growing season and purchase disease free seeds.

Fusarium wilt is a soil-borne fungus, which may also be found in old plant debris as well as the soil. Wilting is one of the first signs of this disease, slowly progressing to faded, yellowing foliage and stunted growth. Eventually most plants succumb to this fungal pathogen and die.

Though fungicides are available that may alleviate the issue, the best way to control its spread is by preventing infection in your crops. This can be achieved through regular rotation of crops and sterilization of the soil through solarization.

There are many potential pests of pea plants, with aphids and pea weevils being the most prevalent.

Aphids multiply rapidly and suck the sap of the plant, resulting in weak and stunted specimens. This also results in very few pods and possible disease contagion such as pea leaf roll and mosaic virus. Ladybugs are an eco-friendly method of pea pest control in this instance, as is neem oil spray.

Mature pea weevils emerge in spring and lay their eggs in the peas seeds. Once hatched, the larvae munch on the seeds, creating holes. Insecticides are useless in this battle since the larvae can’t be affected; therefore, the adults must be eradicated.

The pea leaf weevil attacks both roots and leaves of the plant. Larvae feed on the nitrogen-providing nodules of the plant. Adults appear as a gray-brown bug with a trio of stripes down its back and the infected plant will have notches in foliage.

Additional pests of pea plants include:

The battle against pea plant pests and disease continues. The best defense, as they say, is a good offense. Purchase disease free seeds and plants, practice crop rotation, control irrigation, and space plants accordingly to grow a bumper crop of healthy peas.