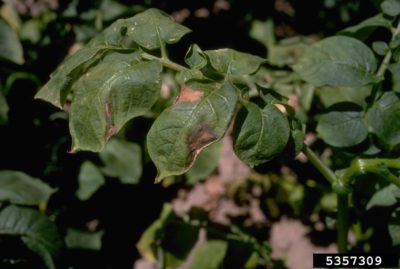 Potato fusarium wilt is a nasty but common disease that enters potato plants through the roots, thus restricting water flow to the plant. Fusarium wilt on potatoes is difficult to manage because it can live in the soil for many years. However, there are steps you can take to minimize the damage and prevent spread of disease. Read on to learn more.

The first sign of potatoes with fusarium wilt is yellowing of the leaves, following by wilting, rolling, or curling, sometimes affecting leaves on only one side of the plant. Symptoms of fusarium wilt typically begin on the lower part of the plant, eventually moving up the stem.

The potatoes themselves may be blemished or decayed, often with sunken brown areas, especially at the stem end.

Plant fusarium-resistant varieties, which are marked by an “F” on the label. Look for disease-free tubers that have been pre-treated with fungicide to prevent development of disease. Never plant potatoes in soil where fusarium wilt is suspected.

Rotate plants with other plants for four to six years. Avoid planting other solanaceous plants such as tomatoes, peppers, tomatillos, eggplants, tobacco, or petunias in the area. Control weeds, as many harbor disease pathogens. Also, remove infected plants and destroy them immediately.

Avoid excessive watering. Water at the base of plants and avoid overhead irrigation whenever possible. Water potatoes early in the day, which allows plants to dry before temperatures drop in evening.

Sterilize tools frequently, using a solution of one part bleach to four parts water when working with potatoes.