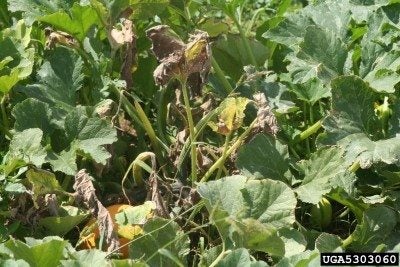 Alas, your glorious strong, healthy pumpkin plants are wilting and yellowing. There’s nothing as sad as having seemingly healthy plants one day and then almost overnight, witness drooping, discolored foliage. Before you can figure out a fix to the problem, it’s probably a good idea to get an idea of why pumpkin plants wilt.

Help! My Pumpkin Plants are Wilting!

There are several reasons for pumpkin plant wilt. The best way to figure out which one may be the cause of your wilting pumpkin plants is to rule out the simplest explanation first.

Lack of water might be the reason for pumpkin leaves that are wilting. Although the large leaves aid in shading the soil and keeping roots cool, the plants still need water. During the heat of the summer, pumpkins need between 1 and 1 ½ inches (2.5-4 cm.) of water per week. Water the pumpkins deeply and slowly once a week at the base of the plant rather than overhead briefly each day.

During extended heat waves, you may even need to water a bit more. It’s not unusual to see wilting pumpkin plants during the heat of the day, but this should be temporary. If you see that your pumpkins are wilting in the morning, they’re most likely water-stressed.

Other reasons for pumpkin leaves wilting and yellowing are less benign than a simple lack of irrigation. In these cases, wilting is caused by disease and can get so severe that the plant will die.

Pumpkin leaves wilting due to insects

While diseases are a factor as to why a pumpkin has wilting leaves, insects are also often responsible.

Overall, pumpkins can be afflicted with a number of things that can cause wilting and yellowing. The best defense is to begin with healthy plants in well-draining soil amended with nutritious compost. Water consistently and practice proper fertilization.

Keep a close eye on the plants to inspect for insects before they become a problem. Keep the area around the plants weed and plant detritus free. A healthy start will enable the plants to fight off or withstand any potential disease or insect attacks and give you time to facilitate a control plan.