Uses For Ramps: How To Grow Wild Leek Ramps In The Garden 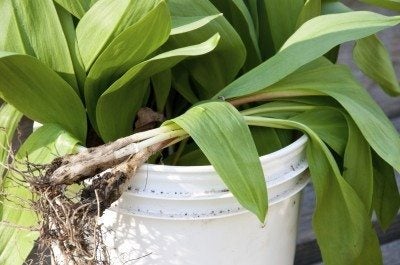 Ever heard of a ramp? What are ramp vegetables? That answers part of the question, but there is so much more to unearth about ramp vegetable plants like uses for ramps and how to grow wild leek ramps.

What are Ramp Vegetables?

Ramp vegetable plants (Allium tricoccum) are native to the Appalachian Mountains, north into Canada, west into Missouri and Minnesota, and south to North Carolina and Tennessee. Growing ramps are commonly found in groups in rich, moist, deciduous forests. A cousin of the onion, leek, and garlic plant, the ramp is also a pungent vegetable that is enjoying a resurgence in popularity.

Ramps have been traditionally foraged rather than cultivated and are easily identified by their leaves, usually two broad, flat leaves are produced from each bulb. They are light, silvery green, 1 to 2 ½ inches (2.5-6 cm.) wide and 5 to 10 inches (13-25 cm.) long. A spring bloomer, the leaves wither and die by June and a small cluster of white flowers is produced.

There is some disparity regarding the genesis of the name. Some folks say the name “ramp” is a shortened version for Aries the Ram, the zodiac sign for April and the month that growing ramps begin to appear. Others say “ramp” is derived from a similar English plant called “ransom” (Allium ursinus), which was previously called “ramson.”

Ramps are harvested for their bulbs and leaves which taste like spring onions with a garlicky aroma. Back in the day, they were usually fried in butter of animal fat with eggs and potatoes or added to soups and pancakes. Both early colonists and American Indians prized ramps. They were an important early spring food source after months of no fresh vegetables and were considered a “tonic.” Ramps can also be pickled or dried for later use. Today they are found sautéed in butter or olive oil in fine dining establishments.

Ramps and their relatives have been used medicinally to treat a host of ailments, and one of these old-time remedies has crossed over into the world of modern medicine. One of the most common uses of both garlic and ramps was to expel internal worms, and a concentrated form is now produced commercially. It’s called allicin, which comes from the scientific name Allium, the group name for all onions, garlic, and ramps.

How to Grow Wild Leek Ramps

As mentioned, ramps are usually foraged, not cultivated– that is until fairly recently. Ramps can be found at many farmers’ markets grown by local farmers. This may be where some people have been introduced to them. This is creating a market for more ramps which, in turn, is causing more farmers to begin cultivating them, and exciting many a home gardener.

So how do you grow wild ramps? Keep in mind that they naturally grow in a shaded area with rich, moist, well-draining soil high in organic matter. Think damp forest floor. They can be grown from seed or via transplants.

Seeds can be sown at any time the soil isn’t frozen with late summer to early fall the prime time. Seeds need a warm, moist period to break dormancy followed by a cold period. If there is not sufficient warming after sowing, the seeds will not germinate until the second spring. So, germination can take anywhere from 6 to 18 months. No one said this was going to be easy.

Be sure to incorporate plenty of the organic matter found in decaying forest soil, such as composted leaves or decaying plants. Remove weeds, loosen the soil, and rake to prepare a fine seed bed. Thinly sow the seeds on top of the ground and press them gently into the soil. Water and cover the ramp seeds with several inches (8 cm.) of leaves to retain moisture.