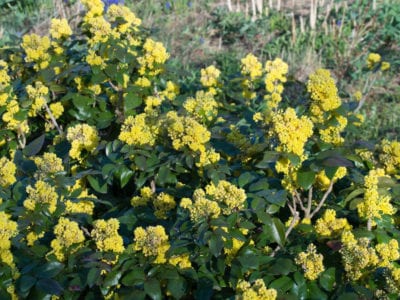 Shrubs for Pacific Northwest gardens are an integral part of the landscape. Growing shrubs in the northwest states provide ease of maintenance, year-round interest, privacy, wildlife habitats, and structure. With the relatively temperate climate, the only difficulty may be deciding which northwestern shrubs to choose.

Whether you are searching for shrubs in northwest states that provide food (like berries) for wildlife, or you want to brighten up the winter landscape with a blooming perennial, there are plenty of options for suitable Pacific Northwest bushes. There are even suitable northwestern shrubs that are drought tolerant and plenty of native Pacific Northwest bushes that are acclimated to the region, thus, making them low maintenance.

Camellias are a prominent feature in many Pacific Northwest gardens. They bloom reliably in the spring, but what about in the winter? Camellia sasanqua blooms in the middle of winter. ‘Setsugekka’ is a white blooming cultivar, while the popular ‘Yuletide’ blooms with a profusion of red flowers accented with yellow stamens that attract overwintering hummingbirds.

Another bloomer is Mahonia, a relative of Oregon grape. ‘Charity’ blooms with spikes of yellow blooms followed by a profusion of blue berries. This evergreen shrub for Pacific Northwest gardens lends an almost tropical feel to the landscape, but don’t let that fool you. Mahonia is tolerant of cold temperatures, including snowfall.

Sweetbox lives up to its name. While the small white blooms are rather inconspicuous, their tiny size contradicts their intense vanilla fragrance. Another bush that tolerates cold temperatures, Sweetbox actually blooms just before Christmas. Two species, Sarcococca ruscifolia and S. confusa are easily found. They grow to about 5 feet (1.5 m.) and thrive in dry shade areas.

Another evergreen, Grevillea comes in at about 8 feet (2 m.) tall and across. This northwestern shrub blooms from September through April with red/orange blossoms that attract hummers and bees. Hummers will also be attracted to Ribes malvaceum, or Chaparral currant. The pink, aromatic drooping blooms draw in hummers but, amazingly, not deer.

Other cool weather bushes to consider for the region include:

Deciduous shrubs lose their leaves in fall and grow fresh foliage in spring. Many bloom in spring, some produce fruit, and others provide bright colors in fall. Some Northwestern deciduous shrubs offer all that and more.

If you’re a gardener in the Pacific Northwest and you’re interested in growing deciduous shrubs, you have a huge selection from which to choose. Here are a few suggestions for deciduous shrubs in the Northwest.

The aforementioned Oregon grape is a native as are many other Pacific Northwest bushes. Salal is commonly found as an understory plant throughout wooded areas of the region and is harvested for use in floral bouquets. It prefers shade to part shade and will spread to become a low maintenance groundcover in areas that have difficulty supporting plant life. Plus, the edible but fairly unpalatable berries become something sublime when made into jelly.

Red Osier dogwood is a native blooming shrub that is found along stream beds. It thrives in either sun or shade, provided the soil is moist. It blooms with clusters of small white flowers that give way to an abundance of berries. As if all this isn’t enough, the stems of this dogwood glow a brilliant red during the typically dreary winter months.

One of the sturdiest of the native shrubs in northwestern states is oceanspray. While the cascades of white to cream blooms look delicate, the plant itself thrives in sun or shade and dry or wet conditions and is practically impossible to kill. It is a dense, rapid grower making it a perfect choice to fill in a hole in the landscape. Many birds flock to the bush for shelter and food.

Evergreen huckleberry provides year-round interest with its deep red new shoots set off against the glossy, dark green leaves and pink spring flowers that make way for red to dark purple berries in the summer. The berries are tiny but absolutely delicious. It can be grown in shade or sun. Interestingly, the more sun it gets the smaller the bush grows.

Osoberry, or Indian plum, is the first of the native Pacific Northwest bushes to leaf out and flower in the spring. While the small plums are bitter, the birds love them. Osoberry prefers dappled light and moderate moisture but for the most part, will do well in any other area of the landscape.

Rhododendrons can be found in almost every garden and should be considered for their gorgeous spring blooms.

Barberry, although prickly, has nice color and a myriad of shapes and sizes.

The list really does go on for shrubs in this area, making the only problem narrowing down which ones to include in your landscape.