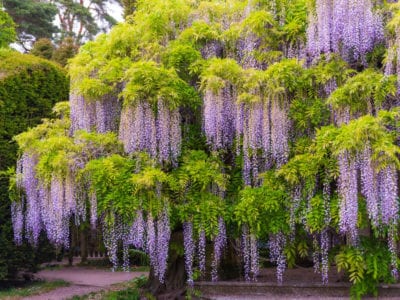 Cold climate zone 3 gardening can be one of the most challenging of the regional conditions. The United States Department of Agriculture zone 3 can drop to -30 or even -40 degrees Fahrenheit (-34 to -40 C.). Plants for this area must be tough and hardy, and able to withstand extended freezing temperatures. Growing wisteria in zone 3 used to be fairly impractical but now a new cultivar has introduced an extremely hardy form of the Asian vine.

Wisteria vines are quite tolerant of a range of conditions but most varieties do not perform well in zones below USDA 4 to 5. Zone 3 wisteria plants were something of a pipe dream as cold, extended winters tended to kill these temperate climate darlings. A chance hybrid found across the swampy areas of south central U.S. from Louisiana and Texas north to Kentucky, Illinois, Missouri, and Oklahoma, Kentucky wisteria is suitable for zones 3 to 9. It even reliably produces flowers in the colder region.

The two most common wisteria plants in cultivation are Japanese and Chinese. Japanese is a bit hardier and thrives in zone 4, while Chinese wisteria is suitable down to zone 5. There is also an American wisteria, Wisteria frutescens, from which the Kentucky wisteria is descended.

The plants grow wild in swampy woods, river banks, and upland thickets. American wisteria is hardy to zone 5 while its sport, Kentucky wisteria, can thrive down to zone 3. There are several new cultivars introduced that are useful for growing wisteria in zone 3. Kentucky wisteria is better behaved than its Asian relatives and is less aggressive. The flowers are a bit smaller, but it reliably returns in spring even after harsh winters.

Another species, Wisteria macrostachya, has also been proven to be reliable in USDA zone 3. It is commercially sold as ‘Summer Cascade.’

Kentucky wisteria plants are the premier wisteria vines for zone 3. There are even a few cultivars from which to choose.

‘Blue Moon’ is a cultivar from Minnesota and has small fragrant clusters of periwinkle blue flowers. Vines can grow 15 to 25 feet (4.5 to 7.5 m.) long and produce 6- to 12-inch (15 to 30.5 cm.) racemes of scented pea-like flowers which appear in June. These zone 3 wisteria plants then produce soft, velvety pods that grow 4 to 5 inches (10 to 12.5 cm.) long. To add to the attractive nature of the plant, the leaves are delicate, pinnate, and deeply green on twining stems.

The previously mentioned ‘Summer Cascade’ bears soft lavender flowers in 10- to 12-inch (25.5 to 30.5 cm.) racemes. Other forms are ‘Aunt Dee,’ with elegant, antique lilac flowers, and ‘Clara Mack,’ which has white blooms.

Tips on Growing Wisteria in Zone 3

These hardy wisteria vines for zone 3 still need good cultural care to thrive and succeed. The first year is the most difficult and young plants will need regular irrigation, staking, trellising, pruning, and feeding.

Before installing vines, ensure good drainage in the soil and add plenty of organic matter to enrich the planting hole. Choose a sunny location and keep young plants moist. It may take up to 3 years for the plant to start flowering. During this time, keep vines tied up and tidily trained.

After the first bloom, prune them where needed to establish a habit and prevent straggling. These species of wisteria for cold climates have been shown to be the most easily established in zone 3 and reliable even after a harsh winter.