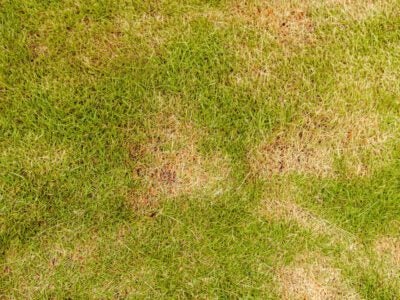 Zoysia is an easy care, warm-season grass that is highly versatile and drought tolerant, making it popular for many lawns. However, zoysia grass problems do pop up on occasion — most often from zoysia diseases like brown patch.

Although relatively free from most pests and diseases, zoysia grass isn’t without its faults. One of the most common zoysia grass problems is the buildup of thatch, which is caused from undecomposed organic matter. This buildup forms just above the soil line.

While raking can sometimes alleviate the problem, regular mowing helps to prevent thatch from accumulating throughout the lawn. It also helps to limit the amount of fertilizer used on zoysia grass.

If you find sections of zoysia dying, this could be attributed to grub worms. Read detailed information on grub worm control here.

Brown patch is probably the most prevalent zoysia grass disease, with patches of zoysia dying off. These dead patches of grass start small but can quickly spread in warm conditions. You can typically identify this zoysia disease by its distinct brown ring that encircles a green center.

Although fungal spores of brown patch cannot be fully eliminated, keeping zoysia healthy will make it less susceptible to the disease. Fertilize only when needed and water in the morning after all dew has dried. For further control, there are fungicides available.

Leaf spot is another zoysia disease that occurs during warm days and cool nights. It is usually caused from overly dry conditions and lack of proper fertilizer. Leaf spot develops small lesions on grass blades with distinct patterns.

Close inspection of spotty areas of zoysia dying will oftentimes be necessary to determine its actual presence. Applying fertilizer and watering grass deeply at least once weekly should help alleviate this problem.

Rust in grass often develops during cool, moist conditions. This zoysia disease presents itself as an orange, powdery-like substance on zoysia grass. Other than using appropriate fungicides targeted toward its treatment, it may be necessary to retrieve grass clippings after or during mowing and properly disposing of them to prevent further spreading of this grass rust.

While zoysia grass diseases are few, it never hurts to check into the most common zoysia grass problems whenever you notice zoysia dying in the lawn.

Printer Friendly Version
Read more about Zoysia Grass
<PreviousNext>
Did you find this helpful? Share it with your friends!
FacebookTweetPinEmail
Related Articles
Newest Articles
You might also like…
Additional Help & Information