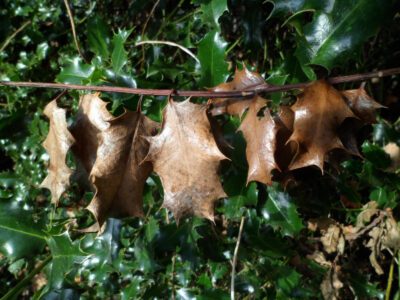 While holly bushes are common additions to the landscape and generally quite hardy, these attractive shrubs occasionally suffer from their share of holly bush diseases, pests, and other problems.

For the most part, hollies are extremely hardy, suffering from few pests or diseases. In fact, most problems that do occur are usually associated with other factors, such as environmental conditions. However, pests and diseases damaging holly bushes can happen so it’s important to become familiar with the most common ones for help in prevention as well as treatment.

Holly tree pests such as scale, mites, and holly leaf miner are the most commonly seen affecting hollies.

Most diseases of holly can be attributed to fungus. The two most prevalent fungal holly tree diseases are tar spot and cankers.

Improving air circulation and keeping debris picked up is good for prevention in both cases.

Sometimes a holly bush disease is due to environmental factors. Such is the case for problems like purple blotch, spine spot, holly scorch, and chlorosis.