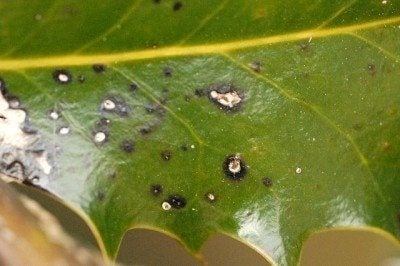 Image by James Lindsey at Ecology of Commanster

Most types of holly plants are normally very resilient. All holly plants, however, are susceptible to a few holly problems. One of those problems is holly leaf spot, also known as holly tar spot. This holly disease can defoliate a holly bush, so it is important to keep a close eye out for it.

Holly leaf spot is normally caused by several fungi, which are either Phacidium curtisii, Coniothyrium ilicinum, or Phytophthora ilicis. The fungi each attack different types of holly plants but they all cause holly problems that are very similar.

Proper holly plant care is the best way to prevent and manage this holly disease. All types of holly plants will be able to fend off these holly problems if they are healthy and hardy.

To prevent leaf spot, prune holly bushes so that they have good air circulation and sunlight. Also, plant holly bushes in suitable conditions for the holly type. Do not water your holly bushes in the morning or at night.

If you recognize early on that your holly bush has been affected (while the spots are still yellow), you can apply a fungicide to the bush and this may reverse the progress of the holly problems.

Once holly leaf spot starts causing the leaves to fall, there is little you can do to stop its progress. Fortunately, the leaf drop will only harm the look of the plant. The bush will survive and will grow new leaves. One important holly plant care tip to prevent the return of the fungus the next year is to gather up all of the fallen leaves and destroy them. Do not compost infected leaves. Also, remove affected leaves from the bush and destroy these as well.

While holly leaf spot is unsightly, it is not deadly. Your holly bushes will recover as long as appropriate steps are taken to prevent the return of this holly disease.

Printer Friendly Version
Read more about Holly Bushes
Next>
Did you find this helpful? Share it with your friends!
FacebookTweetPinEmail
Related Articles
Newest Articles
You might also like…
Additional Help & Information