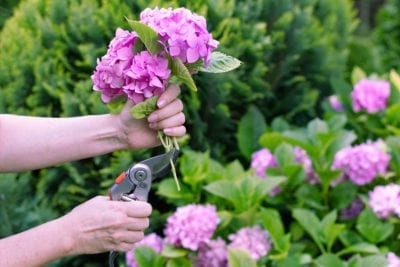 Pruning hydrangea bushes is not necessary unless the shrubs have become overgrown or unsightly. You can safely remove spent blooms (deadhead) anytime. However, there are a couple deadheading tips to keep in mind for optimal results. Try to keep cuts above the first set of large leaves or only cut down to the last healthy buds. This ensures the safety of any developing blooms for the next season.

When pruning hydrangea bushes that have become overgrown, cut stems to the ground. Although this may delay blooming the following season, it helps revitalize the plants. All types of hydrangea respond well to occasional pruning, but it’s important to know what variety you have, as hydrangea pruning care varies.

Understanding how to prune hydrangea bushes according to their particular type and individual needs is important for the overall health and vigor of hydrangea plants. Hydrangea pruning care techniques differ.

When to prune hydrangea bushes varies and is not an exact science. Keep in mind that pruning hydrangea is not always necessary, and unless the situation calls for it, they can simply be left alone. Removal of spent blooms and dead stems each year should be adequate for maintaining healthy hydrangea bushes.