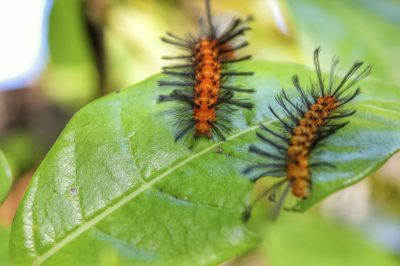 Of all the things that can bother your plants, insect pests have to be one of the most insidious. Not only are they small and hard to spot but their activities are often conducted under leaves, in soil, or at night when they can’t be detected. Oleander wasp moth larvae are one of these little devils. Learning the oleander caterpillar lifecycle and preferred feeding areas can help you identify the insect and squash it like a bug.

Oleander wasp moths are quite striking insects and wasp moth identification is easy. They are deep blue with white polka dots and a fiery red abdomens, lending them the name Uncle Sam’s moth. These patriotic insects fly about during the day, making them easier to define than many other moths. The adults aren’t the source of drama, however. It is their larvae whose preferred feeding ground is oleander.

The moths are easy to see with their daytime flight pattern and bright, neon blue bodies and flirtatious, orangey red rear ends. If you see them flitting about your oleander, you might want to get some sticky traps, as they are likely getting ready to lay eggs on the underside of your bush.

Wasp moths are found in Florida and coastal southeastern states. The fine, tiny eggs are creamy yellow but, eventually, the larvae hatch and begin defoliating your plant. Larvae are caterpillars with orange day-glow skin and thick tufts of black spines. The larvae tend to hang out in groups, blissfully munching on oleander leaves.

Adults prefer to find their nectar in lantana, beggarticks, and several other flowering perennials.

While oleander caterpillars prefer the bush of their name, they will also attack desert rose plants. The devastation is easy to see. The larvae start on younger, new foliage and skeletonize it, leaving webs of veins hanging forlornly from the stems. If you don’t act quickly, the pests can remove all the foliage from your oleander.

Feeding on the poisonous plant gives the larvae a level of toxicity that many predators seem to avoid. In the later instars of the oleander caterpillar lifecycle, the larvae become solitary diners and have huge appetites in preparation for pupation.

Oleander moth damage will likely not kill your plant the first year, but repeated mistreatment will weaken the oleander and open it to other stresses, diseases, and pests.

Quick and decisive control is necessary to prevent further oleander moth damage. In most cases, cutting off the damaged foliage and along with it, the caterpillars, and disposing of it can minimize much of the pest population.

Bacillus thuringiensis is a natural microbe that has been shown to be effective against wasp moth larvae as well as many other pests. Watch for natural enemies and place them in the bush. These include:

In all cases, wear gloves when handling the oleander, as the sap is very poisonous. There are several insecticides listed for use but caution should be exercised when using pesticides in the garden, as they can also kill beneficial insects.