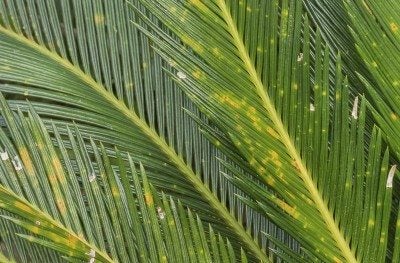 The sago palm (Cycas revoluta) is a lush, tropical looking plant with large feathery leaves. It is a popular houseplant and a bold outdoor accent in warmer regions. The sago palm requires plenty of sunlight but prefers part-shade in hotter climates. Sago palm is easy to grow but it does have some diseases and pests. Read on to learn more.

Dealing with common sago palm pests and disease doesn’t have to spell the demise of your plant. If you know about the issues that affect sagos the most and how to handle them, you’ll be well on your way to correcting them. Common problems with sago palm plants include sago palm yellowing, scale, mealybugs and root rot.

Sago palm yellowing is common in older leaves as they get ready to drop to the ground and make way for newer leaves. If you have ruled out scale and mealybugs, yellowing in younger leaves may be caused by a lack of manganese in the soil.

Applying manganese sulfate powder to the soil two to three times per year will correct the problem. It won’t save the already yellowed leaves, but subsequent growth should sprout green and healthy.

Sago palm pests include scale and mealybugs. Mealybugs are fuzzy white bugs that feed on stems and fruit of plants causing leaf disfiguration and fruit drop. Mealybugs reproduce and spread rapidly so you must attend to them immediately. Control ants, too, as they like the excrement called “honeydew” of mealybugs. Ants will sometimes farm mealybugs for honeydew.

Apply a strong spray of water and/or insecticidal soap to wash these sago palm pests away and/or kill them. More toxic chemical controls aren’t very effective against mealybugs, as the waxy coating on these pests protect them from chemicals. If the mealybugs really get out of hand, you should dispose of the sago palm in the garbage.

Other sago palm pests include various types of scales. Scales are round little insects that form a hard outer shell that is resistant to insecticides. Scales may appear brown, grey, black or white. Scales suck juices from the plants stems and leaves, depriving the plant of its nutrients and water. Asian scale, or Asian cycad scale, is a big problem in the southeast. It causes the plant to look like it has been flocked with snow. Eventually, the leaves turn brown and die.

To control scale you need to apply and reapply horticultural oils and toxic systemic insecticides every few days. In between treatments, you must remove the dead insects, as they won’t detach on their own. They may be harboring living scales beneath them. You can do this with a scrub brush or high pressure hose. If the scale really gets out of control, it is best to remove the plant so the scale doesn’t spread into other plants.

Sago palm diseases include Phytophthora fungi. It invades the roots and root crowns of the plant causing root rot. Root rot results in leaf wilt, discoloration, and leaf drop. One way to identify the Phytophthora disease is to look for a dark vertical stain or sore on the trunk possibly with black or red-black oozing sap.

This disease will retard plant growth, cause die-back or even kill the plant. Phytophthora loves compacted, poor draining, overwatered soil. Make sure you plant your sago palm in good draining soil and do not overwater it.