Rooting Wisteria Plants: How To Propagate Wisteria From Cuttings 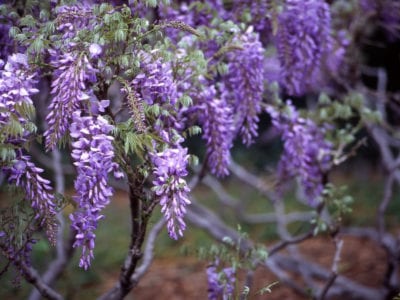 How to Propagate Wisteria Cuttings

Propagating wisteria from cuttings starts with getting the cuttings. As mentioned, a great source of cuttings can come from pruning wisteria, but you can also take wisteria cuttings from the plant specifically for rooting wisteria plants.

Cuttings of wisteria need to be taken from the softwood. This is wood that is still green and has not developed woody bark. The cutting should be about 3 to 6 inches (7.5 to 15 cm.) long, and have at least two sets of leaves on the cutting.

Once you have the cutting, remove any sets of leaves found on the lower half of the wisteria cutting. These will be the main points where new roots will develop. Trim the cutting so that the lowest node (where the leaves you just removed were) are 1/2  to 1/4 inch (1 to 6 ml.) from the bottom of the cutting. If there are any flower buds on the cutting, you can remove these.

Prepare a pot with well-draining potting soil that has been thoroughly moistened. Dip the rooting end of the cutting into rooting hormone. Using a finger or a stick, make a hole in the potting soil, then place the wisteria cutting in the hole and gently press the soil in around it.

Cover the pot in plastic, either by placing plastic wrap over the top of the pot or by placing the whole pot in a plastic bag. It is important that the plastic does not touch the cuttings, so you may want to prop the plastic away from the cuttings with sticks. The plastic helps to hold in humidity, which increases the success rate of propagating wisteria from cuttings.

Place the pot of wisteria cuttings in a place where they will receive bright, indirect light. Check the soil frequently and water when dry to the touch. The cuttings should be rooted in about four to six weeks.

Growing wisteria from cuttings is easy when you know how to propagate wisteria correctly.