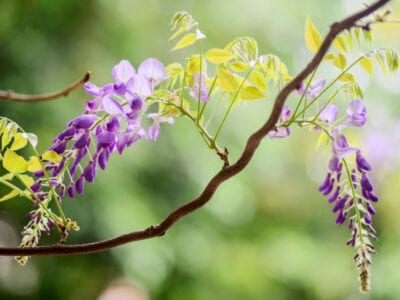 The long purple flowers of wisteria are the stuff garden dreams are made of and growers will wait patiently for years just to see them for the first time. Those purple flowers can transform any space into something magical, but what do you do if there are curling leaves on wisteria in your garden? This common problem may seem overwhelming, but it’s a pretty simple situation. Curled wisteria leaves are commonly caused by sap-sucking pests or a lack of fertilizer in the soil — both are easy to remedy.

When wisteria leaf curl becomes apparent in your garden, check the leaves carefully to determine what is causing the problem. Although you might get lucky applying garden chemicals willy-nilly, it’s never a good idea and more often than not will prolong the problem, possibly killing your plant in the process.

Aphids – If you see small, seed-like insects that cluster on the undersides of leaves, along with a sticky, sap-like material on the leaves themselves, you’re probably dealing with aphids. These tiny sap-feeding insects cause leaves to curl when they feed on developing buds, so you may have sporadic wisteria leaf curl throughout areas where aphids are active.

Aphids are easily dispatched with daily sprays from a garden hose to dislodge them from their feeding sites. Once detached, the insects die quickly, but many more may hatch to take their place, so be vigilant and spray daily for at least two weeks, making sure to hit the undersides of leaves especially well.

Scale – When twisting of wisteria leaves is accompanied by small waxy or cottony growths near affected leaves, scale insects are probably to blame. These tiny pests are immobile as adults – covered in their protective shells, they often feed undetected. Many gardeners initially misdiagnose these pests as a plant disease or fungal infection, but if you carefully lift a few of the covers with a sharp knife, you’ll find a tiny, soft-bodied insect inside.

Treat scale with neem oil after giving your wisteria a thorough watering. Apply the spray to areas where scale are feeding on a weekly schedule until you no longer see signs of an active colony and leaves begin to return to normal. Damaged leaves can’t be fixed, but new leaves should emerge looking perfect. Neem oil can cause phytotoxic reactions on under watered or otherwise stressed plants, so make sure your wisteria has proper care before starting to spray.

If checking leaves thoroughly doesn’t reveal a reason for curling leaves on wisteria, look to the soil. Perform a soil test to see what’s going on in the root zone, sometimes a lack of fertilizer can cause wisteria leaves to curl.

Wisteria vines do well with a balanced fertilizer, such as a 10-10-10. Too much nitrogen can cause excessive leaf growth at the expense of flowers, so make sure that you really need it before adding extra nitrogen to your wisteria’s root zone.