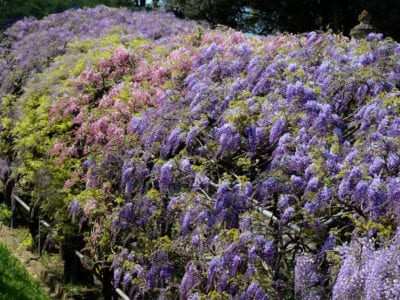 Many people love taking in the wonderful lilac-colored blooms of wisteria vine each spring. What happens when there are no leaves on wisteria vine though? When wisteria does not have leaves, it is often thought to be a cause for alarm. However, this isn’t normally the case at all.

Reasons for Wisteria Not Leafing Out

There are actually several reasons why wisteria does not have leaves. Most commonly this can be due to weather. Those having cooler than normal spring weather can often expect delays in trees and other plants, such as wisteria, leafing out.

So how do you know if your wisteria with no leaves is simply slow to start (dormant) or actually dying? Check for stem flexibility first. If the plant bends easily, it’s ok. Dead plant stems will snap and break off. Next, scrape off a little bark or break a small piece off. Green indicates health. Unfortunately, if it’s brown and dried out, the plant is most likely dead.

Occasionally, leafing out may be delayed due to poor pruning practices. While there’s nothing wrong with cutting out any dieback or unsightly growth, doing so at the wrong time may cause a delay in leafing.

On the other hand, doing this in spring could allow more light and warmth to reach the inner most branches, promoting regrowth. Plants that do not receive sufficient light have fewer leaves and slower growth. They will also be paler in color with leggy growth once it does emerge. If pruning has caused a delay, don’t worry too much as sprouting will eventually occur.

Newly planted tree wisteria may take longer to leaf out in spring. While some people may notice regrowth right away, others may not see any growth until later in the season, from June to late July. During this time, you need only keep the soil somewhat moist. Be patient. Once they become established, the wisteria will begin to leaf out.

Finally, the type of wisteria you have can affect when the leaves emerge. Perhaps you’ve noticed blooming of your wisteria but no leaves on wisteria vine. Again, this can be attributed to the variety. If you notice beautiful purple blooms prior to foliage growth, then you probably have a Chinese wisteria. This type forms flower buds on previous year’s wood. Therefore, it commonly blooms before the plant actually leafs out. Japanese wisteria blooms after the plant has sprouted leaves.