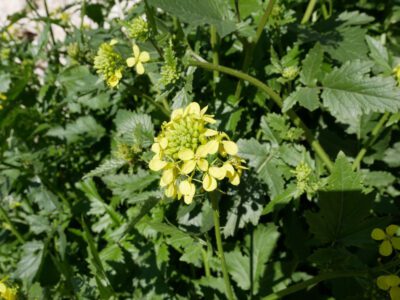 Identifying weeds and understanding their growth habit can be a difficult, yet sometimes necessary task. Generally, to a gardener who prefers a tidy garden, a weed is a weed and needs to go, plain and simple. However, by identifying weeds, we can better understand how to control them. Not all weed control products or herbicides work the same way on every weed. The more you know about a specific weed, the easier it will be to choose the correct method of control. In this article, we will specifically discuss weedy cruciferous plants.

These days, in the horticulture world, the term “cruciferous” is usually used to describe vegetables, such as:

Up until the early 20th century, plants which we now consider members of the Brassicaceae family were classified in the Cruciferae family. Both the present Brassicaceae family and past Cruciferae family include cruciferous vegetables, however, they also include hundreds of other plant species. Some of these other plant species are commonly known as cruciferous weeds.

How to Recognize Cruciferous Weeds

Many of the cruciferous plants that are considered invasive, noxious weeds in the United States originally came from Europe, Asia, North Africa, or the Middle East. Most were considered a valuable food or medicine in their native regions, so early settlers and immigrants to the United States brought their seeds with them, where they soon got out of hand.

There are a number of methods that can be employed to help manage cruciferous weeds from the Brassicaceae family. Since their seeds can germinate throughout the year with sufficient soil moisture, keeping the area somewhat on the dry side may help. Pre-emergent herbicides, like corn gluten meal, can be used early on to help prevent germination.

For seedlings that do emerge, a post-emergent herbicide should be applied before the weeds become large enough to set seed. Burning, or flame weeding, is yet another option in suitable areas and with proper precautions taken.

In areas where cruciferous weeds occur in low numbers, hand-pulling or spot spraying individual plants with an organic herbicide, such as vinegar or boiling water, may be a more preferable alternative.