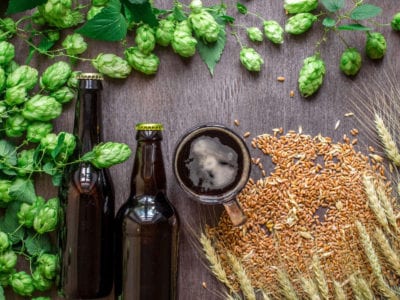 If you enjoy brewing your own beer, you may want to try your hand at growing beer ingredients in containers. Hops are tricky to grow in a potted beer garden, but the fresh flavor is worth the extra effort. Barley is easier to grow, although you may need several pots. Read on to learn the basics of growing a container beer garden.

Hops require a large container, so the roots have room to spread. Look for one with a diameter of at least 20 inches (51 cm.). Plan on one rhizome per container. You’ll also need some type of adjustable trellis to accommodate the vines as they grow. You can easily make a trellis with wooden stakes and twine. (Technically, hops produce “bines,” which attach themselves to a trellis with suckers and tendrils).

Fill the container to the rim with good quality potting soil, then plant the hop rhizome 2 to 3 inches (5-8 cm.) deep. This is the best time to install the trellis. Place the container where the hops will be exposed to full sunlight for several hours per day (preferably, all day). However, if you live in a hot climate, a location with morning sun and afternoon shade is preferable. Too much heat will damage the hops.

Keep the potting soil moist until sprouts appear. At that point, water deeply whenever the potting mix is almost dry and avoid shallow, frequent watering. Don’t wait until the plant wilts. You may need to water daily during the summer but don’t overwater. Provide a balanced liquid fertilizer diluted to one-quarter strength. Repeat monthly.

Look for malting barley seeds for your potted beer garden. You may want to grow barley in several large, sturdy containers. Scatter the seeds at a rate of one or two per inch (2.5 cm.), then press the kernels firmly into the potting soil. Plant barley kernels in fall or early winter for harvest in June or July.

Harvest barley when the kernels are hard and can’t be dented with your fingernails. Separate the kernels from the stalks by rubbing them between your hands.

Remove the chaff by pouring the grain back and forth between two containers. Turn on a fan to blow away the chaff. Store the barley in an airtight container in a cool, dark spot until you’re ready to use it.

Plants for A Potted Beer Garden

Other plants for a container beer garden, depending on your flavor preferences, include: