Vines For Small Spaces: Growing Vines In The City 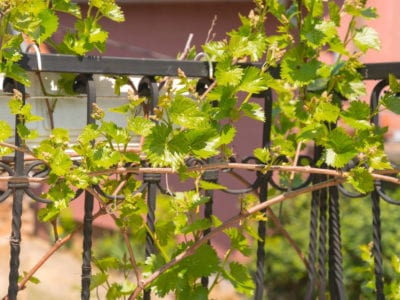 Urban dwellings such as condos and apartments often lack privacy. Plants can create secluded areas, but space can be an issue since many plants grow as wide as they are tall. This is when urban vine growing comes into play. True, some vines can be huge, and these vines don’t belong in the city garden, but there are plenty of vines for small spaces, even vines that can be grown in containers. Read on to learn how to grow vines with no space.

When it comes to growing vines with no space, it pays to do some research. Not only are some types of vines vigorous growers (which is good if you wish to cover an area ASAP), but they can get out of hand in terms of size.

Size isn’t the only issue when choosing vines for small spaces. Some vines, such as Virginia creeper and creeping fig, use small suction cups and aerial roots to cling to whatever they are clambering up. This isn’t great news in the long run, as these clinging vines can damage soft brick, mortar, and wood siding.

The one thing that is absolutely necessary when growing vines in the city is some form of support. This may be a trellis or DIY support or fence. Even vines in containers will need some type of support.

When growing vines in the city, or really anywhere, consider what you are growing the vine for. Often, privacy is the answer but take it a bit further. If you want privacy, then consider utilizing evergreen vines, such as evergreen clematis.

Also, consider whether you want the vine to bloom, fruit, and/or have fall color as well as what type of light will be available. Lastly, consider the growth rate of the vine. For instance, silver lace vine can grow up to 25 feet (8 m.) in a year, while a climbing hydrangea takes its sweet time and may take years before it gives any coverage.

Wisteria is a classically romantic, vigorous, deciduous vine, but it does need sturdy support and isn’t the best choice when growing vines with no space. Instead, look for smaller, daintier types of vines such as the Tasmanian blueberry vine or the Chilean bellflower.

The Tasmanian blueberry vine (Billardiera longiflora), also called climbing blueberry, only gets to about 4 feet (1 m.) in height and, as the name suggests, produces edible fruit. Chilean bellflower (Lapageria rosea) has huge, tropical, bell-shaped blooms on a vine that grows to about 10 feet (3 m.).

Smaller landscapes or lanai owners may be looking to grow vines in containers. Clematis is an example of a vine that does well in containers, as are the following: