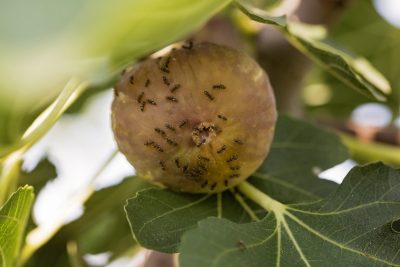 Figs (Ficus carica) belong to the family Moraceae, which includes over 1,000 species. They have been cultivated for thousands of years with remnants having been found in Neolithic excavations dating back to 5,000 B.C. Despite their ancient history, they are not without many of the same fig tree insect pests that plague the tree today. The key to fig tree pest control is learning how to identify common fig tree pests.

The common fig is a deciduous tree to shrub cultivated for its delicious “fruit.” Fig fruit is not actually a fruit but rather a syconium, or a fleshy hollow area with tiny flowers on its interior walls. Hailing from western Asia, figs, depending upon conditions, can live for 50 to 75 years with reliable production.

A condition that might impede their longevity is pest infestation on fig trees. One of the more common pests is the nematode, specifically the root knot nematode and the dagger nematode. They reduce tree growth and yield. In the tropics, nematodes are battled by planting the fig close to a wall or building to allow the roots to grow beneath the edifice, thwarting nematode damage. In lieu of planting near a structure, heavy mulch can deter nematodes as can the proper application of nematicides. Adding marigolds around the tree should help too.

Other pests found on fig trees include:

There are several plans of attack when treating bugs on figs. Not every pest is controllable, however. For instance, the fig tree borer lays its eggs near the base of a branch and then the resulting larvae hatch and tunnel into the tree. Once the larvae are in the tree, control is extremely difficult. Insecticide can be squirted into the tunnels with a syringe, which is time consuming and exacting.

The best defense against borers is a good offense. Enclose the lower portion of the tree in netting to prevent the females from laying their eggs in the bark. Also, cover the top of the netting with foil coated with Vaseline.

Treating bugs, such as dried fruit beetles or spider mites on figs, may require spraying. Dried fruit beetles or sap beetles include related species such as the Freeman and Confused sap beetle. They are small black to brown beetles, about 1/10 to 1/5 inch (2.5-5 mm.) long, that may or may not have spotted wings. When they feed on the figs, the fruit spoils and is rendered more attractive to other pests. It is also often infected with Aspergillus niger, a fungal disease that can affect ripening fruit.

To combat these beetle pests, set bait traps prior to figs ripening. When the traps have done most of the work of ridding the tree of beetles, spray the tree with an insecticide containing malathion in a sugar/water solution according to the manufacturer’s instructions. Stay clear of the sprayed area for at least 12 hours and do not harvest any figs for three days.

Both the Pacific spider mite and two-spotted spider mite may afflict a fig tree. They are both yellowish green with black spots. They feed on the underside of the fig leaves, which causes them to brown and drop. Spider mites do have some predatory insects, such as predaceous mites and six-spotted thrips, that will kill them; otherwise, smother them with a horticultural oil mixed with water or a pesticide that has bifenazate in it. If you use a spray with bifenazate, be warned that you should not eat the figs for an entire year.

Earwigs don’t really pose a threat to fig trees but they will eat the fruit. An insecticide that contains spinosad will most likely kill them.

The larva of the carpenter worm burrows under the bark of the fig and can kill entire branches. The larvae are easily recognizable as 2 inch (5 cm.) cream colored grubs that exude sap and sawdust as they feed. A parasitic nematode, Steinernema feltiae, will help to control them.

Unfortunately, in the case of the darkling ground beetle, there is no biological or chemical control. These ¼ inch (6 mm.), dull black beetles and their larvae feed on decaying detritus at the base of the tree and in the surrounding soil. The best defense in this case is sanitation; keep the area around the tree free from weeds and harvest ripe figs immediately.