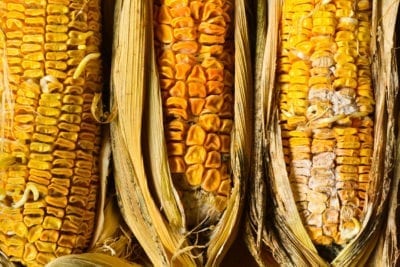 Corn with ear rot is not often evident until harvest. It is caused by fungi that can produce toxins, rendering the corn crop inedible to both humans and animals. Since there are multiple fungi that cause ear rot in corn, it is important to learn how each type differs, the toxins they produce, and under what conditions they develop– as well as corn ear rot treatment specific to each. The following corn ear rot info delves into these concerns.

Usually, corn ear rot diseases are fostered by cool, wet conditions during silking and early development when the ears are susceptible to infection. Damage caused by weather conditions, such as hail, and insect feeding also opens the corn up to fungal infections.

There are three main types of ear rot in corn: Diplodia, Gibberella, and Fusarium. Each differs in the type of damage they afflict, the toxins they produce, and the conditions that cultivate the disease. Aspergillus and Penicillium have also been identified as ear rot in corn in some states.

The husks of infected ears of corn are often discolored and turn down earlier than uninfected corn. Usually, fungal growth is seen on the husks once they have been opened. This growth varies in color depending upon the pathogen.

Ear rot diseases can cause significant losses. Some fungi continue to grow in stored grain which can render it unusable. Also, as mentioned, some fungi contain mycotoxins, although the presence of ear rot does not necessarily mean that mycotoxins are present. Testing by a certified lab must be done to determine if the infected ears contain toxins.

Diplodia ear rot is a common disease found throughout the Corn Belt. It occurs when conditions are wet from mid-June through mid-July. The combination of developing spores and heavy rains before tasseling easily disperses the spores.

Symptoms include a thick white mold growth on the ear from the base to the tip. As the disease progresses, small raised black fungal reproductive structures appear on infected kernels. These structures are rough and feel akin to sandpaper. Ears that are infected with Diplodia are suspiciously lightweight. Depending when the corn was infected, the entire ear may be affected or just some kernels.

Gibberella (or Stenocarpella) ear rot is also more likely when conditions are wet a week or so after silking. This fungus enters through the silk channel. Warm, mild temperatures foster this disease.

Telltale signs of Gibberella ear rot is a white to pink mold covering the ear tip. It can produce mycotoxins.

Fusarium ear rot is most common in fields that have been affected by bird or insect damage.

In this case, ears of corn have infected kernels scattered amongst healthy looking kernels. White mold is present and, on occasion, the infected kernels will become brownish with light streaking. Fusarium can produce the mycotoxins fumonisin or vomitoxin.

Aspergillus ear rot, unlike the previous three fungal diseases, occurs after hot, dry weather during the last half of the growing season. Corn that is drought stressed is most susceptible to Aspergillus.

Again, wounded corn is most often affected and the resulting mold can be seen as greenish yellow spores. Aspergillus may produce the mycotoxin aflatoxin.

Penicillium ear rot is found during storage of the grain and is fostered by high levels of moisture. Wounded kernels are more likely to become infected.

Damage is seen as a blue-green fungus, generally on the tips of the ears. Penicillium is sometimes mistaken as Aspergillus ear rot.

Many fungi overwinter on crop debris. To combat ear rot diseases, be sure to clean up or dig in any crop residue. Also, rotate the crop, which will allow the corn detritus to break down and reduces the presence of the pathogen. In areas where the disease is endemic, plant resistant varieties of corn.