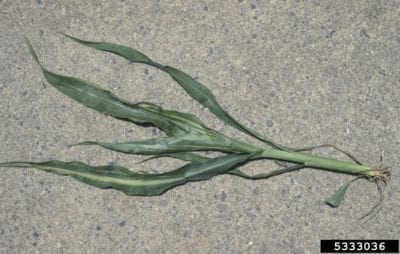 Planting various types of corn has long been a summer garden tradition. Whether grown out of necessity or for enjoyment, generations of gardeners have tested their growing prowess to produce nutritious harvests. Specifically, home growers of sweet corn cherish the succulent and sugary kernels of freshly shucked corn. However, the process of growing healthy crops of corn is not without frustration. For many growers, issues with pollination and disease can be a cause for concern throughout the growing season. Luckily, many common corn problems can be prevented with some forethought. One such disease, called Stewart’s wilt, can be greatly diminished with a few simple techniques.

Manifesting in the form of linear stripes on corn leaves, Stewart’s wilt of corn (corn bacterial leaf spot) is caused by a bacterium called Erwinia stewartii. Infections are generally classified into two types based on when each occur: seedling stage and the leaf blight stage, which impacts older and more mature plants. When infected with Stewart’s wilt, sweet corn may prematurely die back regardless of the age of the plant, if the infection is severe.

The good news is that the probability of high incidence of Stewart’s wilt of corn can be predicted. Those who keep careful records can determine the threat of infection based on weather patterns throughout the previous winter. This is directly related to the fact that the bacteria is spread by and overwinters within the corn flea beetle. While it is possible to control flea beetles through the use of insecticides approved for use in the vegetable garden, the frequency at which the product must be used is generally not cost effective.

The most effective means by which to control corn bacterial leaf blight is through prevention. Make certain only to purchase seed from a reputable source in which the seed has been guaranteed to be disease free. Additionally, many corn hybrids have proven to show great resistance to Stewart’s wilt of corn. By choosing more highly resistant varieties, growers can hope for healthier harvests of delicious sweet corn from the home garden.