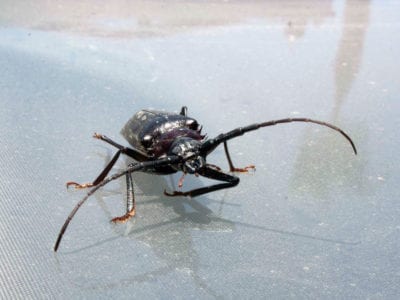 The unique climate and terrain of the American Southwest is home to several interesting southwestern garden pests and hardy desert plant pests that may not be found in other parts of the country. Take a look below at these pests of the Southwest and learn what you can do to keep them in check.

Here are some of the more common southwestern garden pests you may come across in this region:

Adult paloverde beetles are huge black or dark brown beetles often measuring more than 3 inches (8 cm.) in length. The larvae, pale greenish yellow with brown heads, are even bigger. Mature beetles lay their eggs in the soil, near the base of trees and shrubs. As soon as the larvae (grubs) hatch, they get to work feeding on the roots of shrubs and trees such as rose, mulberry, olives, citrus, and, of course, palo verde trees.

The grubs can do significant damage in their two to three year lifespan. The adults, which emerge in summer, live only about a month, giving plenty of time to mate and lay eggs. To control this pest, remove adult paloverde beetles by hand. Encourage natural predators. Beneficial nematodes and neem oil may be helpful.

One of the most common desert plant pests, cactus longhorn beetles are shiny, black beetles often seen walking slowly on or near cacti. They measure about an inch (2.5 cm.) in length. Female beetles pierce stems at the base and lay their eggs inside the tissue. Prickly pear cactus and cholla are favored host plants and may die when the beetles burrow into stems and roots.

To control, pick adults off by hand. Encourage birds and other natural predators. Beneficial nematodes and neem oil may be helpful.

Although this tiny pest is found around the world, it is native to the Southwest where it feeds primarily (but not solely) on cactus. Scale insects are usually found in clusters on shady, protected parts of the plant. When cochineal scale insects are crushed, they emit a bright red substance called “carmine.” Carmine protects the scale from other pests. The colorful stuff is often used by humans to create a useful dye.

Control with insecticidal soap, horticultural oil, or systemic insecticides if infestations are severe.

Also known as runaround bug, agave plant bug is a small, fast-moving pest that you may see racing to the underside of leaves any time they are disturbed. When it comes to nuisance pests of the Southwest, agave plant bugs are near the top of the list, as a severe infestation can be fatal for agave and other succulents. The pests have voracious appetites and feed by sucking sap from the tender leaves.

Printer Friendly Version
Read more about Southwest
<PreviousNext>
Did you find this helpful? Share it with your friends!
FacebookTweetPinEmail
Related Articles
Newest Articles
You might also like…
Additional Help & Information