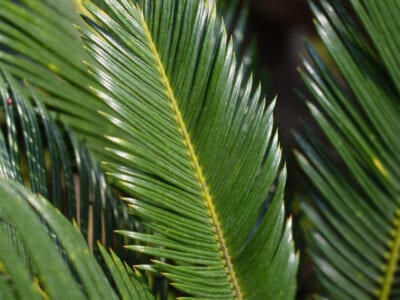 Sago palms (Cycas revoluta) are members of the ancient Cycadaceae family that dominated the landscape over 150 million years ago. The plant is also called Japanese sago because it is native to the subtropical, southern islands of Japan. It isn’t a true palm, but sago palm fronds resemble those of palm trees, and caring for a sago palm is similar to caring for a true palm. Sago palm leaf tips curling is a sign of stress that can be caused by several factors.

Why are My Sago Leaves Curling?

Sago palms get their species name from the fact that the leaflets are revolute, or curled under, on the new fronds. After the main stem of the sago palm fronds mature enough to assume their natural shape, the leaflets gradually relax and uncurl. Unnatural leaf curl on sagos, particularly when it is accompanied by discoloration or spots, however, indicates a problem.

Abnormal leaf curl may be the result of insufficient water, fungal disease, or a nutrient deficiency. Sago palms need a steady supply of water in summer when they are actively growing. They also need micronutrients such as magnesium, which isn’t always present in general purpose fertilizer.

How to Fix Curling Fronds

So how to fix curling fronds on sagos that are not the norm? First, you should water sago palms deeply, completely saturating the root zone in summer. The easiest way to do this is to use drip irrigation, but you can also water slowly with a sprinkler or hose. Apply water as long as the soil can absorb it and the water doesn’t run off. If it begins to run off before the root zone is saturated, stop for about 20 minutes and then resume watering.

A layer of mulch will help prevent evaporation and keep the moisture level steady. It will also reduce the number of weeds, which compete with the sago palm for moisture and nutrients.

When sago palms are infected with fungal diseases, leaf tip curl is accompanied by discoloration or spots on the leaves. If the leaves have white or tan spots, try scraping them off with your fingernail. If you can remove the spots without removing part of the leaflet, they are probably mealybugs or scale insects. Neem oil is a good treatment for these pests.

Other discolorations and spots that appear water-soaked are probably fungal disease. Use a fungicide labeled for use on sago palms according to the package instructions. Again, neem oil (which doubles as a fungicide) will help.

Sago palms have special nutrient requirements. Use a palm fertilizer in spring, summer, and fall according to the package instructions. Pull back the mulch and apply the fertilizer to the area under the canopy. Water lightly and then replace the mulch.