What Is Pyola: Using Pyola Oil Spray For Pests In Gardens 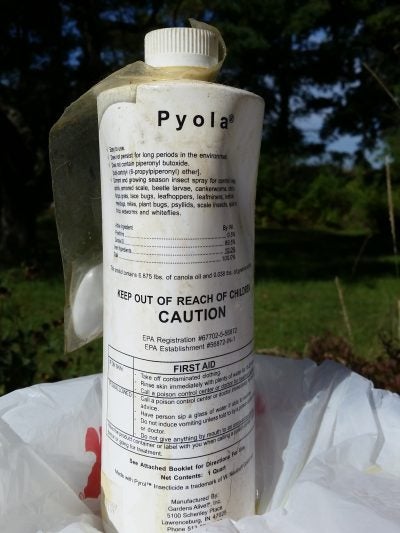 Finding safe and effective yard treatments for pests can be a challenge. There are plenty of non-toxic formulas on the market but the problem is that they don’t work well. Pyola is a brand name, all-natural formula that is effective on some problem pests. What is Pyola? The active ingredient is pyrethrin, which comes from a flower.

Garden sprays line the shelves of nurseries and big box stores. Many of these are broad spectrum, can get into our ground water and pollute it and have a tendency to drift, causing harm in areas that are not targets. If you must use insecticide, it should at least be safe enough to use around your family and not poison the water table. Pyola may be the product for you.

Is Pyola Safe to Use?

A sprayer is effective when using Pyola oil spray, as it must directly contact the pests to be effective. The product controls aphids, caterpillars, Colorado potato beetles, leafhoppers, armored scale and many more pests of vegetables and ornamental plants. The product kills on contact and consistent Pyola application can reduce seasonal pest levels because it will also kill eggs and larval insects.

Shake the mixture well in a sprayer. It has the unfortunate ability to remove the blue color from Spruce trees, so use caution when spraying near these. Some ornamental trees are sensitive to the product and require a 1% solution. Some of these are:

There are several cautions listed on the bottle. Don’t over spray and allow the product to drip on the ground, do not allow children or pets into the area until the spray has dried, and don’t apply when it is windy.

You can’t use it within ten days of a sulfur application, more than ten times per year, or more than three days in a row. It is a non-specific insecticide that has the potential to harm your good bugs too.

Word on the web is that it won’t harm honey bees, but I would take that with a grain of salt. As with most pesticide products, it is harmful to aquatic life and invertebrates, so use around a pond is unadvised.

All in all, Pyola garden use is safer than most of the chemical mixes out on the market, but some caution is also recommended.