Garden Bug Lesson: How To Teach About Insects In Gardens 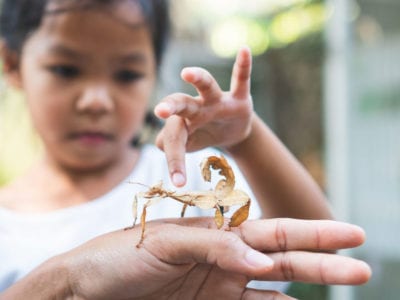 Grownups tend to be squeamish about creepy-crawly insects, but kids are often naturally fascinated by bugs. Why not start teaching kids about bugs when they’re young so they won’t be fearful or grossed out when they’re older?

Garden bug lessons can be a lot of fun and in the process, kids learn the difference between destructive pests and helpful bugs that work to keep bad guys under control. Wondering how to teach about insects? Basically, just tap into their natural curiosity. Here are a few helpful suggestions about bugs and kids.

How to Teach About Insects

The Internet offers a wealth of information when it comes to lessons about insects. Search for “teaching kids about bugs” or “garden bug lessons” and you’ll find activities for kids of all ages.

Your local library is likely to have good information too. Look for age-appropriate e-books or, if you have some handy, magazines with a lot of color pictures are great resources too.

It’s critical for kids to learn that bugs aren’t all bad, and the good guys are often interesting and colorful. Familiarize your children with helpful insects like:

These bugs are often called “predators” because they prey on harmful insects.

Spiders aren’t insects, but they should be protected and appreciated because they control many pests. (In the United States, only a couple species have toxic venom). Older kids can learn how to identify common spiders in your area, how they build webs, and how they catch their prey.

Many parasitic insects are also beneficial. For instance, parasitic wasps and tachinid flies don’t sting, but they lay their eggs inside pests.

Bad bugs harm plants in a number of ways. Some, such as aphids, mealybugs and mites, suck the sweet sap from the leaves. Others, like cabbage maggots, cutworms, slugs, and tomato hornworms tunnel into roots, cut stems at soil level, or chew on leaves.

Beetles are a mixed bag because many are beneficial. However, some beetles, such as flea beetles, potato beetles or Japanese beetles, do an incredible amount of damage to gardens and agricultural crops.

Bugs and Kids: Pollinators and Recyclers

Lessons about insects should always include the importance of honeybees and how they pollinate plants and make honey. Explain that honeybees sting only when they are threatened.

Explain the difference between bees and wasps. Wasps are also pollinators, and they eat pests like grubs and flies. However, it’s important to know which is which because some wasps will sting.

Kids love butterflies, and the colorful fliers are also pollinators, although less effective as bees.

Bugs that recycle aren’t always pretty to look at, but they’re critical in healthy soil. Recyclers, also known as decomposers, work by recycling dead plant material and pooping it back into the soil. In the process, they return nutrients and keep the soil well aerated.

Recyclers include ants, maggots, and many types of beetles. (Worms aren’t insects, but they are powerful recyclers and make a great tie in).