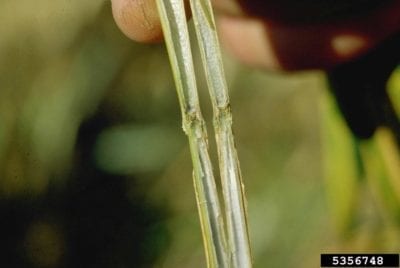 Barley take-all disease is a serious problem afflicting cereal crops and bentgrasses. Take-all disease in barley targets the root system, resulting in root death and can result in significant financial loss. Treating barley take-all relies on recognizing the symptoms of the disease and requires a multi-management approach.

Take-all disease in barley is caused by the pathogen Gaeumannomyces graminis. As mentioned, it afflicts small cereal grains such as wheat, barley, and oats as well as bentgrass.

The disease survives on crop debris, grassy host weeds, and volunteer cereals. The mycelium infects the roots of living hosts and as the root dies it colonizes the dying tissue. The fungus is primarily soil borne but soil fragments can be transmitted by wind, water, animals, and cultivating tools or machinery.

Initial symptoms of the disease arise as the seed head emerges. Infected roots and stem tissue darken until it is almost black and lower leaves become chlorotic. The plants develop prematurely ripe tillers or “whiteheads.” Usually, plants die off at this stage of infection, but if not, difficulty in tilling becomes apparent and black lesions extend from the roots up into the crown tissue.

Take-all disease is fostered by moist soil in areas of high rainfall or irrigation. The disease often occurs in circular patches. Infected plants are easily pulled from the soil due to the severity of the root rot.

Control of barley take-all disease requires a multi-pronged approach. The most effective control method is to rotate the field to a non-host species or as a weed-free fallow for a year. During this time, control grassy weeds that can act harbor the fungus.

Be sure to till in crop residue deeply or remove it entirely. Control weeds and volunteers that act as hosts for the fungus especially 2-3 weeks prior to planting.

Always select a well-draining site to plant the barley. Good drainage makes the area less conducive to take-all disease. Soils with a pH under 6.0 are less likely to foster the disease. That said, applications of lime to change the soil pH can actually encourage more severe take-all root rot. Combine the lime application with a crop rotation of fallow period to reduce the risk.

The seed bed for the barley crop should be firm. A loose bed encourages the spread of the pathogen to the roots. Delaying fall planting also helps reduce the risk of infection.

Lastly, use ammonium sulfite nitrogen fertilizer instead of nitrate formulas to reduce root surface pH and thus the incidence of the disease.