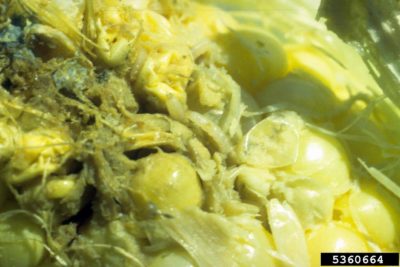 Sweet corn is one of summer’s many delights. Roasted, steamed, on the cob, off the cob, but always dripping with butter. Rotting corn kernels are a real downer for corn lovers. What causes sweet corn kernel rot? There are several ear rot fungal diseases and even one that is caused by an insect. This article will discuss the varieties of disease and how to diagnose and treat each one for healthier, juicier corn crops.

Fresh corn on the cob, with its juicy kernels and sweet flavor, is best when it comes straight from the garden plot. If harvest time sees you frustrated because there is kernel rot in sweet corn, it’s time to get proactive to prevent the problem next year. Sweet corn with kernel rot is a common sight when weather is wet and humid, and plants exhibit nutrient or cultural deficiencies. Damaged ears from insects or birds are also highly susceptible to rots.

Common smut is found in many types of corn and in all kinds of planting situations. The fungus that causes it overwinters in soil for 3 to 4 years. This makes crop rotation extremely important. Injury to the ears from animals, insects or hail provides an entry point for the fungus to colonize. Ears are most commonly affected, showing a white membrane and then exploding open to reveal a black powdery spore mass.

Other common kernel rot in sweet corn are Gibberella ear rot, Aspergillus ear rot and black corn. Each is caused by a different fungus. Management is difficult because each is promoted by certain weather conditions, which are impossible to control. Gibberella can be diagnosed by its pinkish, reddish mold. This type of fungus is toxic to humans and other animals, and the ears should be discarded even if mildly infected.

Sweet corn kernel rot from insects is also common. In fact, a variety of insects can be responsible for sweet corn with kernel rot. Insect tunnels make an opening for fungi and other diseases to penetrate the cobs. Of the many bugs that like sweet corn as much as we do, the following are going to cause the most problems:

The best way to prevent their damage is to watch for moths and adult beetles. These will lay their eggs on the forming corn ears and the hatched larvae will suck or bore into the kernels. The openings left invite disease. Treatment of corn early in the season usually prevents most insect pests that can cause rot in corn kernels.

It may be cliché, but often putting up a scarecrow will do the trick. Preventing injury to the ears from bird damage can help avoid rot symptoms.

Setting sticky traps or using an organic pesticide early in the season may reduce injury from insects and their larvae.

A few strains of corn have some resistance where seed has been treated with a fungicide. Because many fungi live in soil and spread easily in wind or by rain splash, some of the damage is hard to avoid. Usually, a small portion of plants will be affected and the rest will be fine. To prevent the spread of the disease, remove the infected plants.