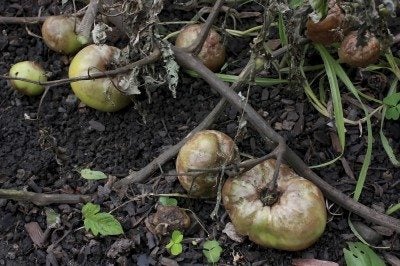 Problems growing vegetables may run the gamut from the more obvious vegetable garden pests or plant diseases to issues related to the environment like weather conditions, nutrition, and even those caused by people or animals. Proper irrigation, fertilization, location, and when possible, the choice to plant disease-resistant varieties can aid in creating your own little Garden of Eden.

There are a plethora of plant diseases that may afflict the veggie garden. These are merely a handful that are commonly found in gardens.

Clubroot – Clubroot is caused by the pathogen Plasmodiophora brassicae. Vegetables affected by this common disease include:

Damping off – Damping off, or seedling blight, is another common disease seen in most veggies. Its source may be Aphanomyces, Fusarium, Pythium, or Rhizoctonia in origin.

White mold – White mold is another common disease found in many crops and is inflicted by the pathogen Sclerotinia sclerotiorum. These include:

Other diseases such as cucumber mosaic virus, root rot, and bacterial wilt may cause wilting of foliage with dead areas apparent and mottled fruit.

Other problems one may encounter when growing vegetables are caused by insect infestations. Some of the most common invaders that can be found in the vegetable garden include:

Beyond diseases and pests, gardens are susceptible to problems caused by temperatures, drought or over-irrigation, and nutrient deficiencies.