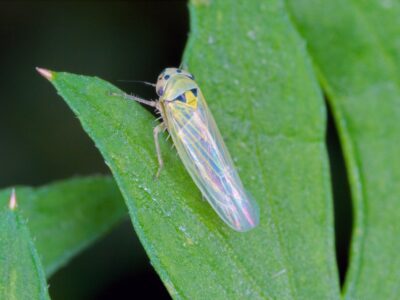 Garden pest insects can make short work of your ornamental and edible gardens. So, it is wise to learn who the main offenders are and how to reduce or eliminate their impact.

In this part of the South— Texas, Oklahoma, Arkansas, Louisiana, and Mississippi— many pests feed on leaves, fruit, and stems. The Asian citrus psyllid, though tiny and unassuming, threatens every state that grows citrus, not for its feeding damage, but because it can carry and transmit a bacterium that causes the deadly disease known as citrus greening.

Garden experts say to examine your plants at least twice a week. Closely inspect the top and underside of the leaves, as many of the culprits reside there. Especially if you are growing fruits and vegetables, it is important to stop the spread quickly. Some feeding damage on the leaves of edibles can be tolerated but preventing feeding on the fruit is of utmost importance.

Pest Insects in Texas and The Southern United States

While each state has its own share of insect pests, there are several pests that are common to Texas, Oklahoma, Arkansas, Louisiana, and Mississippi. They include:

• Stink bugs – Stink bugs can damage many vegetables by feeding on the fruit. Their bodies are brown or green in a shield shape. Stink bugs are most noticeable in late summer and fall. When examining your plants for pests, remove egg masses, nymphs, and adult stink bugs by hand.

• Squash bugs – Squash bugs feed on squash, cucumbers, pumpkins, and watermelons. They look a lot like a stink bug but are longer and more oval shaped. They damage plant leaves by sucking on their juices. Row covers can help protect young plants. Look for any egg masses on the undersides of leaves and remove them. Nymphs and adults can be removed from plants and dropped into a bowl of soapy water.

• Squash vine borers – Squash vine borers are reddish orange moths with black wings that lay eggs on squash, pumpkins, and other cucurbits. The caterpillars then feed on the plant, boring into the stems, eventually killing the plant. Destroy any plants that have died.

• Fruitworms – Fruitworms, such as tomato fruitworms and corn earworms, attack a variety of vegetables by boring into the produce. The moths fly at night laying eggs on the plants. The organic Azadirachtin can help eliminate the pests.

• Asian citrus psyllid – The Asian citrus psyllid, mottled brown about the size of an aphid, can carry and transmit a bacterium, ‘Candidatus Liberibacter asiaticus’ (CLas), which causes the disease huanglongbing (HLB), also known as citrus greening, which is fatal to trees. Control with two products– a foliar pyrethroid insecticide to knock down visible pests and a soil-applied systemic insecticide to eliminate pests hidden in new foliage.

Following are additional pests and how to control them.

• Scale – Soft scale and armored scale can be a real problem for ornamental shrubs and trees. Soft scales produce a soft coating that can be whitish, cottony, or waxy. Armored scale has a hard cover that hides the insect. They attach to plants and feed on sap, never moving. Heavy infestations can cause yellowing of leaves or leaf drop. They weaken the plant making it prone to secondary pests and disease, which can kill the plant. Treat with horticultural or Neem oil.

• Japanese beetles – This invasive pest can do a lot of damage quickly to ripe fruit and broadleaf foliage. They tend to feed in groups on a variety of plants from June to August. The larval stage of Japanese beetles are the white grubs that feed on lawn roots in early spring. The adult beetle is about 3/8 of an inch (9.5 mm.) long, metallic green with copper colored wing covers and white tufts under the wing covers. In early morning, pick them off the plants and drop them into a bowl of soapy water. If the infestation is severe, an insecticide labeled for their use may be used, but follow the instructions carefully, including how best to avoid desirable insects such as pollinators.

• Blackberry (Raspberry) Crown Borer – A major pest of blackberries, the blackberry (raspberry) crown borer, resembles a yellow jacket because of its black and yellow coloring. It’s two year life cycle includes egg, larva, and pupal stages. The primary canes show wilting or dying of all leaves in May or June, which indicates girdling by the larvae. Dig out and destroy infected canes and roots in late fall or early spring. Insecticidal sprays can be used the first year in mid to late October, then again the following April. Saturate the plants and the soil. To achieve control, the spray must be applied for two consecutive years in both fall and spring. Then apply once a year as a preventative.

• Two-spotted Spider Mite in Strawberries – It is one of the most damaging pests of strawberries wherever they are grown in the U.S., as well as on other ornamentals and edibles. Its feeding affects the size, quality, and quantity of fruits. Uncontrolled infestations can result in the loss of the plants. Mites appear as dark green dots on the undersides of leaves. With a 10x magnifying lens, they are yellow to pale green with a dark blotch on each side. Inspect the plants for nymphs and adults as well as predatory mites. If the number of predatory mites is half as many as the two-spotted mites, you do not need to treat them. If treatment is warranted, use a miticide recommended by your local extension agent.

• Leaf-footed bugs – Leaf-footed bugs are mainly a problem on tomatoes and tomatillos, though they attack most other vegetables. Adults resemble stink bugs with a grayish brown body and white horizontal stripe. Its hind feet look like leaves. Plant early to avoid their high numbers in late summer and fall. Sunflowers can be grown to trap the bugs whereby you can spray them with a contact spray such as pyrethrin. If you don’t kill them, the sunflower will act as a crop, bringing in more leaf-footed bugs.

• Thrips – Thrips are tiny insects that feed on leaves and fruit of tomatoes, peppers, watermelons, and most other garden vegetables and many ornamentals. Several species occur, with the western flower thrip carrying the tomato spotted wilt virus. Look for tomato varieties that are resistant to tomato spotted wilt virus. Reflective mulches are effective in reducing the number of thrips. Also, chemical controls such as insecticidal soap, neem oil, and permethrin may be effective when used as directed.

• Aphids – Aphids are a common problem in Oklahoma as well as most other areas. The tiny insects, often yellow, green, red, or black, suck juices from leaves and produce a sticky substance called honeydew, which can attract ants and also cause sooty mold. A strong blast of water directed under the leaves will remove many of them. Neem oil or insecticidal soap also can help.

• Leafhoppers – Closely related to true bugs, adults hop or fly when disturbed. Wingless nymphs run when disturbed. Adults are wedge shaped, about 1/8 inch to ½ inch (3 mm. to 1 cm.) long, depending on species. Leafhoppers can be colored yellow, green, gray, or patterned. Neem oil or pyrethrum can help reduce large populations.

• Sweet potato weevil – The adult is small and thin bodied for a weevil, appearing more like an ant. It is blue-black except for the reddish midsection and legs. The larvae tunnel into the tubers and stems and continue its life cycle within stored tubers. Damaged tubers develop a bad odor and taste. Practice crop rotation and plant sweet potato stock that are weevil free. At the end of the season destroy vines, volunteers, and nearby morning glory vines, which also serve as host plants. An insecticide may be used post-harvest to prevent weevil development while stored, but be sure to wash the potatoes before consumption.

• Bilster Beetle – Adults feed on flowers and foliage of ornamental plants, alfalfa, potatoes, garden vegetables, and other plants. Immature blister beetles feed on grasshopper eggs or are predacious and considered beneficial. However, some species live in solitary bee nests. They should not be handled as they carry a toxin (cantharadin) that can cause blisters. Animals feeding on blister-beetle contaminated feed can become ill or die. Cut alfalfa hay before bloom time to reduce incidence of its contamination. Control of blister beetles with insecticides is not usually needed.