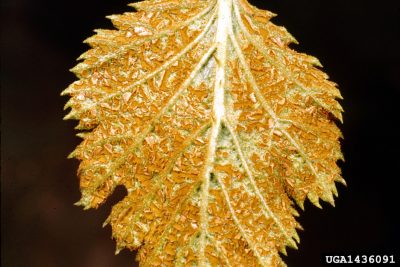 What Causes Rust on Raspberries?

Leaf rust on raspberries is a disease that attacks the foliage of raspberries. It may be caused by the fungus Phragmidium rubi-idaei. It appears as yellow pustules on the upper side of leaves in the early summer or in the spring. As the disease progresses, orange pustules appear on the underside of the foliage. Further into the disease, the orange pustules turn black. These black pustules contain overwintering spores. Severe infection results in premature leaf drop.

Arthuriomyces peckianus and Gymnoconia nitens are two additional fungi that may cause rust on raspberry leaves. In this case, the fungi appear to only attack black raspberries as well as blackberries and dewberries. Symptoms appear in the early spring as new shoots begin to emerge. New leaves become stunted and deformed and a pale, sickly, green or yellow. Waxy blisters dot the underside of the foliage. The blisters eventually turn a bright, powdery orange lending the disease the name “orange rust.” Infected plants become bushy rather than caning.

As with P. rubi-idaei, orange rust overwinters in diseased roots and canes. All three are fostered by cool, wet conditions. The spores mature and break open around June and are spread to other plants by the wind.

No chemical control is known to be effective in treating rust on raspberries. If the disease becomes evident in only a few leaves, remove them. If the plant appears to be fully disease involved, however, remove the entire plant.

Starting the berry plot properly will go a long way in the prevention of fungal diseases. Keep the planting area weeded and the rows cut back to facilitate leaf drying. The disease needs a fairly lengthy period of leaf wetness to germinate and penetrate foliage in the spring. Allow plenty of air circulation amongst the canes; do not crowd the plants. Feed the plants when necessary to ensure vigorous raspberries.