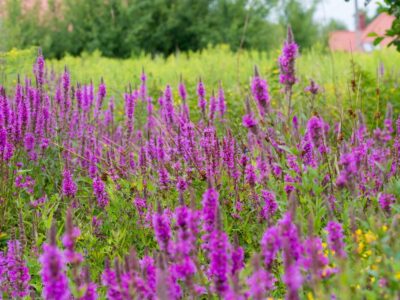 Invasive plants are those that thrive and aggressively spread in areas that are not their native habitat. These introduced species of plants spread to such an extent that they can do damage to the environment, the economy, or even to our health. USDA zone 4 covers much of the northern portion of the country and, as such, there is a fairly lengthy list of invasive plants that thrive in zone 4. The following article contains information on the most common invasive plants in zone 4, although it is by no means comprehensive, as non-native plants are constantly being introduced.

Invasive plants in zone 4 cover lots of territories, but here are some of the most commonly found invasive species with some alternatives you can plant instead.

Gorse and Brooms– Gorse, Scotch broom, and other brooms are common invasive plants that thrive in zone 4. Each mature shrub can produce over 12,000 seeds that can survive in the soil for up to 50 years. These shrubs become highly flammable fuel for wildfires and both the flowers and seeds are toxic to humans and livestock. Non-aggressive plant alternatives for zone 4 include:

Butterfly Bush– Although it provides nectar that attracts pollinators, butterfly bush, or summer lilac, is an extremely hardy invader that spreads via broken stem sections and seeds dispersed by wind and water. It can be found along riverbanks, through forest regions, and in open range areas. Instead, plant:

English Holly– Although the cheerful red berries are often used for holiday décor, don’t encourage resilient English holly. This holly can also invade various habitats, from wetlands to forests. Small mammals and birds that eat the berries spread the seeds far and wide. Try planting other native plants such as:

Polygonum– Several plants in the Polygonum genre are known to be USDA zone 4 invasive plants. Fleece flower, Mexican bamboo, and Japanese knotweed all create dense stands. Knotweeds can become so dense that they affect passage for salmon and other wildlife and restrict access to riverbanks for recreation and fishing. Native species make less invasive options for planting and include:

Russian olive– Russian olive is found primarily along rivers, stream banks, and areas where seasonal rainfall pools. These large shrubs bear dry, mealy fruit that is fed on by small mammals and birds that, again, disperse the seeds. The plant was originally introduced as a wildlife habitat, soil stabilizer, and for use as windbreaks. Less invasive native species include:

Saltcedar– Another invasive plant found in zone 4 is saltcedar, so named since the plants exude salts and other chemicals that render the soil inhospitable for other plants to germinate. This large shrub to small tree is a real water hog, which is why it thrives in moist areas such as along rivers or streams, lakes, ponds, ditches, and canals. It not only affects the soil chemistry but also the amount of water available for other plants and also creates fire hazards. It can produce 500,000 seeds in a year that are spread by wind and water.

Tree of Heaven– The tree of heaven is anything but heavenly. It can form dense thickets and pop up in pavement cracks and railroad ties. A tall tree of up to 80 feet (24 m.) in height, leaves can be up to 4 feet (1 m.) in length. The seeds of the tree are affixed with paper-like wings that enable them to travel great distances in the wind. The crushed foliage smells like rancid peanut butter and is thought to produce toxic chemicals that thwart any other healthy plant growth in close proximity.

Additional plants that can become invasive in the cooler climate of zone 4 include:

Of the water-loving invasive plants, there are parrot feather and Brazilian elodea. Both plants spread from broken stem fragments. These aquatic perennials can create dense infestations that trap sediment, restrict water flow, and interfere with irrigation and recreational activities. They are often introduced when people dump pond plants into water bodies.

Purple loosestrife is another aquatic invasive plant that spreads from broken stems as well as seeds. Yellow flag iris, ribbongrass, and reed canary grass are aquatic invaders that spread.