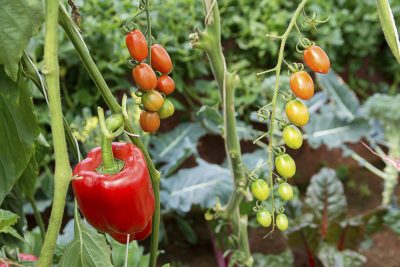 Growing peppers? You’ll be glad to know that there are many pepper plant companions that can benefit your peppers. How can companions for peppers engender healthier plants with higher yields? Read on to find out about pepper companion planting and plants that like to grow with peppers.

Companion plants for peppers or other veggies work together symbiotically, each giving and/or receiving something from the other. Companion planting simply means grouping different, but complimentary, plants together. This may accomplish several things.

Companion planting may provide shade or act as a wind barrier, it may succeed in retarding weeds or deterring harmful pests and disease, or it may act as a natural trellis or aid in moisture retention.

There a many plants suitable for growing alongside peppers.

Tomatoes and bell peppers can be planted in the same garden, but be sure to rotate them to a different area the successive growing season so they don’t pass on overwintering pathogens. The tomatoes deter soil nematodes and beetles.

Carrots, cucumbers, radishes, squash, and members of the Allium family all do well when grown in close proximity to peppers.

Eggplant, a member of the nightshade family along with peppers, thrives alongside peppers.

Spinach, lettuce, and chard are suitable pepper companions. They help crowd out weeds and due to their short stature and rapid maturation, are a great way to maximize garden space and get in an additional crop. Beets and parsnips can also fill in space, retard weeds around the peppers, and keep the soil cool and moist.

Corn serves as a windbreak and sun barrier to peppers, while beans and peas fix nitrogen into the soil, a necessary nutrient for peppers, and also help block wind and sun. Buckwheat can be grown around pepper plants to attract pollinators and, once harvested, serves as green mulch for the garden.

Pepper plants comingled with asparagus is another great space saver. Once the asparagus has been harvested in the spring, the peppers can utilize the space.

As with everything, there is good with the bad. Peppers don’t like the company of every plant, although this is quite a lengthy list. Avoid planting peppers near members of the Brassica family or with fennel. If you have an apricot tree, don’t plant peppers near it since a common fungal disease of peppers may also spread to the apricot.