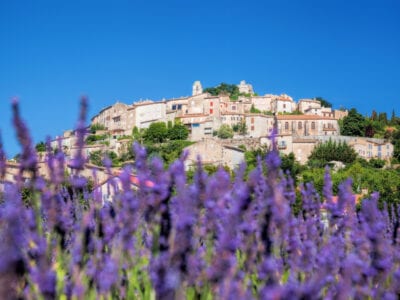 One of the most important household duties of a medieval lady was the provisioning and harvesting of herbs and medicinal plants and roots. Plants cultivated in the summer months had to be harvested and stored for the winter. Although grain and vegetables were grown in the castle or village fields, the lady of the house had a direct role in the growth and harvest of household herbs. Read on to learn about medieval herb gardens.

No respectable lady would be without her medicine chest, which often proved a lifeline for those afflicted with winter colds and fevers. Failure to secure a good harvest could be the difference between life and death.

Herbs and plants grown in manor and castle gardens basically fell into one of three categories: culinary, medicinal, or household use. Some herbs fell into multiple categories and some were grown for their ornamental value. Purely ornamental plants, however, were much more rarely cultivated than they are today, and many plants we consider ornamental now had more practical uses in past times.

For instance, Dianthus or “pinks” were cultivated in medieval times for culinary uses. Pinks had a clove-like flavor and were used fresh to flavor many summer dishes. They were known for their strong, pleasant smell and were believed to promote general health. The Dianthus grown today has little smell or taste and is cultivated mainly for its beauty.

Culinary plants and herbs were grown for use during the summer and were preserved to add to winter fare. Herbs and vegetables had to be harvested in quantity and preserved, usually by drying, to last through the long and arduous winter months. Some herbs were able to withstand winter in the ground and provided a yearlong bounty. Herbs often able to grow through all but the harshest winter conditions included:

Other plants had to be harvested and dried These included:

Herbs were usually dried in bundles hung in a cool place with good airflow for two to three weeks. Dried herbs could be left hanging or could be stored in jars or crocks or used in unguents and vinegars. Rosehip jelly was a special favorite during the winter. And, herbed jellies, jams, and wines added variety to winter diets.

Herbs were an important source of vitamins and nutrients during the winter months when greenery was scarce. People also provided needed variety from the repeated grain and meat dishes in the winter. In addition, they served as a camouflage for meats gone rancid or poorly preserved.

Medicinal herbs were grown and dried for use during the winter. Herbs could be preserved dried for up to a year without losing their potency, or they could be powdered or added to fats to create ointments and pastes. These included:

Willow bark, garlic, and some other medicinal herbs and plants could be harvested throughout the year. Self heal, feverfew, and willow were used to break as well as prevent fevers. Lavender, sage and peppermint were considered digestive aids. Goosegrass and boneset were believed to be good for healing breaks as well as cuts and lesions. Dandelion was considered a purgative and diuretic. Sachets were also created and carried to stave off illness and to sweeten the air. They served the dual purpose of deodorant during winter months when bathing was all but impossible.

Such herbs were used to sweeten the air and to alleviate pests. Lavender, citron, and rosemary are still used today to deter fleas and moths.

As you can imagine, harvesting herbs and plants for winter use was very important for the castle, as well as the simple villager’s hut. You can grow and dry your own winter herbs today quite simply. Herbs dry when hung in two to three weeks. They need to be in a dark, cool space with ample airflow.

Unlike medieval matrons, you’ll have the ability to zip-lock your dried herbs, increasing their longevity. Before using any herbs, make sure you know what they are. Be careful to label all your herbs before drying. Sage and rosemary may be easy enough to identify while growing, but herbs look deceptively alike once dried.

Also, be careful not to dry culinary herbs (sage, rosemary, curry, basil) side-by-side with household herbs (lavender, patchouli). This practice will help you further avert confusion. And as with all plants, be careful and respectful of their uses. By growing and preserving herbs and plants, you’ll be carrying on a tradition that stretches back to medieval times and earlier!

Printer Friendly Version
Read more about General Herb Care
Next>
Did you find this helpful? Share it with your friends!
FacebookTweetPinEmail
Related Articles
Newest Articles
You might also like…
Additional Help & Information